Eureka: Marsh Campers Must be out May 2 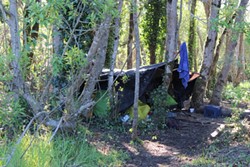 The city of Eureka is moving forward with a plan to expel all homeless encampments from the Palco Marsh area behind the Bayshore Mall by May 2.

The city is meanwhile soliciting proposals from organizations or individuals with an “exit strategy” for the 200 or so people currently living in the marsh area, but doesn’t specify exactly what type of strategy it would like to see other than to say any plan would have to be limited to six months in duration and can’t rely on any city funding or resources.

Last week, Affordable Homeless Housing Alternatives unveiled its plan to put sanctioned homeless camps and a tiny-house village in Eureka, but President Nezzie Wade made clear the group's plans were for indefinite camps that would allow folks to stay until the were ready to leave. That apparently wasn't acceptable to city officials, who feel any sanctioned camp must be temporary in nature, especially as the city has pledged its commitment to instituting a Housing First philosophy, which seeks to put all available city resources into putting homeless people directly into housing.

In its press release (copied below), the city makes clear it will move forward with the “removal” of those camping in the Marsh as of May 2 regardless of whether an alternative plan is in place. As we reported back in February (see “Push and Pull”), the city has a host of reasons for wanting to rid the area of encampments, including liability concerns, a trail project slated to break ground this spring and growing environmental and humanitarian concerns.

"For all of these reasons, the city must take swift and decisive action," City Manager Greg Sparks said in the release.

The City has set a date of May 2, 2016 for individuals camping behind the Bayshore Mall to leave the area. “Trail construction is set to begin mid-May 2016 and in order to protect individuals the area must be vacated.” Mayor Frank Jäger stated. The City will be working with the County Department of Health and Human Services and other local service providers to coordinate efforts to assist those camping in the marsh to obtain temporary housing, bus tickets back to family, or other services such as treatment options for drug or alcohol abuse.
In addition, the City will be issuing a Request for Proposals (RFP) next Friday, March 25, 2016, for any individuals or organizations who are interested and qualified to execute an “exit strategy” for relocation of the homeless population in the areas slated for construction. The plan will be limited to a duration of six (6) months and minimum qualifications will include an operations plan, a safety/security plan, a staffing plan, a schedule, and a budget. No City funding or other resources will be provided.
The City wishes to confirm, however, that removal of people will still occur on May 2, 2016 even if an acceptable proposal is or is not received. The RFP process is occurring separate and apart from the May 2 deadline. “People must be out of the marsh no later than that date so that construction can proceed,” noted City Manager, Greg Sparks. The RFP process will follow a different track and timeline.
According to Chief Andrew Mills, “For decades, the Palco Marsh area has been the site of crime and disorder beyond illegal camping. Reports to City staff, the police, and Councilmembers of violence, theft, human and drug trafficking have been frequent and persistent. EPD has made and continues to make arrests, seize firearms and consistently warn people living in and frequenting the area against criminal behavior. There is a compelling government interest to protect the City from this behavior. EPD will continue to work with DHHS, MIST and other organizations to provide housing to those who desire it.”
The City has also been faced with losing its insurance coverage in the marsh area due to a lawsuit filed by Kathleen Anderson, a local resident, who was allegedly injured in the marsh in an area known as the Drying Sheds. The City paid out $400,000.00 to Ms. Anderson and the
Press Release – Marsh March 18, 2016 Page 1
City’s insurer has indicated that if the Drying Sheds are not removed by this summer that the City will risk losing its insurance coverage for the area.
In addition, the City is very concerned about the environmental degradation that is taking place not only in the marsh areas but, also to Humboldt Bay. The City has been notified by several state agencies that the City needs to address the issues surrounding the homeless encampments or notices of violation could be issued. The Parks and Recreation Department who has been performing clean-ups of the area on a weekly basis has collected two 40-yard dumpsters each week for the past several months. “The amount collected has been consistent with no decrease in illegally dumped material. This past week we actually collected three 40- yard dumpsters, a significant increase from the previous weeks,” according to the Parks and Recreation Department Director, Miles Slattery.
“For all of these reasons, the City must take swift and decisive action,” said City Manager, Greg Sparks.