'They've Got me Dead to Rights': Opening Argument Given in Bullock Case

Over the course of 45 minutes this morning, the Humboldt County District Attorney's office gave jurors a preview of the evidence it will present in the coming weeks in an attempt to prove that Gary Lee Bullock tortured and murdered St. Bernard Pastor Father Eric Freed on Jan. 1, 2014.

In an opening statement that was notably devoid of emotional or dramatic appeal, Deputy District Attorney Andrew Isaac explained that he plans to call a total of 11 witnesses and wrap his case next Friday. Bullock’s attorney, Kaleb Cockrum, declined to give an opening statement today, and instead reserved the right to do so before presenting the defense’s case later in the trial.

Bullock stands accused of breaking into the rectory of St. Bernard Catholic Church in the early morning hours of Jan. 1, 2014, hours after he was released from the Humboldt County jail, with the intent of stealing Freed’s car. Once in the rectory, Bullock allegedly beat and tortured Freed to death before attempting to burn the residence down, taking Freed’s car and driving it back to his Redway home.

Bullock has entered dual pleas of not guilty and not guilty by reason of insanity to a total of seven charges in the case. Jurors are presently tasked with determining if Bullock is guilty of the charges he faces. If they decide he is, the case will move on to a second trial in which jurors will be asked to determine if Bullock was legally insane at the time of the pastor’s killing.

Freed was a beloved local figure, both within the church and in the greater community. Coming to St. Bernard Parish in 2011, Freed had spent two decades studying and ministering in Japan and Italy, and he quickly became known locally for his broad world view and fresh perspective. Known as both scholarly and jovial, Freed also taught religious studies at Humboldt State University and headed the school’s Christian and Catholic societies. 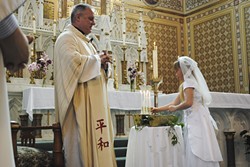 But jurors this morning heard none of that, as Isaac didn’t share any details of Freed’s life. Instead, after introducing himself and his investigators, he dove into the details of the case, telling jurors that they will hear recorded jail phone calls Bullock placed to his mother, wife and grandmother. In a portion of one call played for jurors this morning, Bullock can be heard telling his mother that he is going to spend the rest of his life in prison. When she tries to console him, he tells her, “They’ve got video of me. They’ve got me dead to rights.”

Isaac said the complicated part of this trial will be determining Bullock’s intent, not his actions. “There’s not going to be any evidence that shows Mr. Bullock didn’t kill father Freed,” Isaac said. “Mr. Bullock killed father Freed.”

If Isaac proves to the jury that Bullock intended to kill Freed, Bullock can be found guilty of the charges necessary to send him to prison for life without the possibility of parole.

In perhaps the most dramatic moment in this morning’s opening statement, Isaac held up a chart created by forensic pathologist Mark Super detailing the wounds he found on Freed’s body during an autopsy. “You’ll see Fr. Freed was beaten literally from the top of his head to the tips of his toes,” Isaac told the jury, adding that it will see evidence of a cut between Freed’s toes. “He was beaten from head to toe.”

In previewing the 11 witnesses he intends to call, Isaac then walked jurors through a host of evidence in the case, telling them surveillance video shows Bullock on the church grounds trying to break into the rectory and ultimately doing so through a ground-level window. Evidence will show Bullock’s DNA was found inside the residence, and Freed’s blood was later found on Bullock’s clothes, Isaac said. Jurors will see evidence that Freed was beaten with a wooden stake and a “club-sized” metal pipe, Isaac said, and that he appears to have been strangled.

And, to bolster the torture allegation, Isaac told jurors they will hear evidence that Bullock forced the broken, vase-shaped portion of a pilsner beer glass into Freed’s mouth, pushing and twisting it until it “bored a hole” in the pastor’s tongue.

Isaac said Bullock twice tried to burn down the rectory to destroy evidence of the murder, first by dousing Freed’s body in scotch whisky and trying to light it on fire and then by opening the gas on a stove burner and leaving a lit cigar nearby. In an odd moment, Isaac — who occasionally referred to notes to but seemed to be speaking extemporaneously — said that Bullock hadn’t paid close enough attention to the television series MacGyver, noting that he should have placed the cigar farther away from the burner. As it was, Isaac said the cigar simply ignited the open burner, which burned off the gas in the rectory and prevented an explosion.

Isaac told jurors they will also hear a hint of motive from Bullock himself, referencing a phone call the defendant made to his wife in which he told her that he didn’t call her when released from jail the night of the killing because he didn’t think she would have come to get him and, instead, “figured [he’d] find [his] own way home.”

Bullock, who sat next to his attorney clad in a burgundy dress shirt, showed little emotion throughout Isaac's remarks. Wrapping up his statement, Isaac implored the jury to pay close attention throughout the trial. After Cockrum opted to postpone his opening statement, the court took a brief break, after which Isaac was expected to call his first witness.