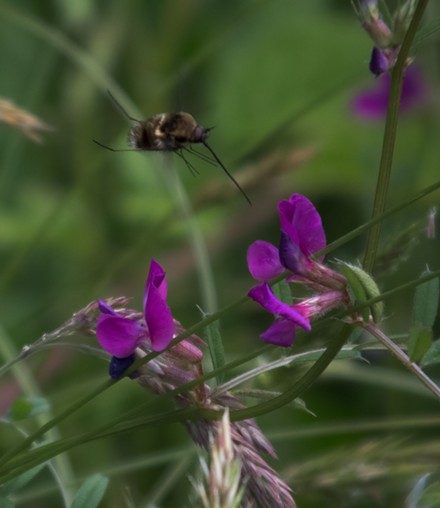 Taking macro photos of insects in the wild is kind of like hunting. If everything goes well you find a subject, get the shot and bag your prey. Unlike deer hunting, you do not need to carry home a dead animal and dress it out in the garage, there is no season and, as of yet, Fish and Game doesn't require licenses for entomological photography. 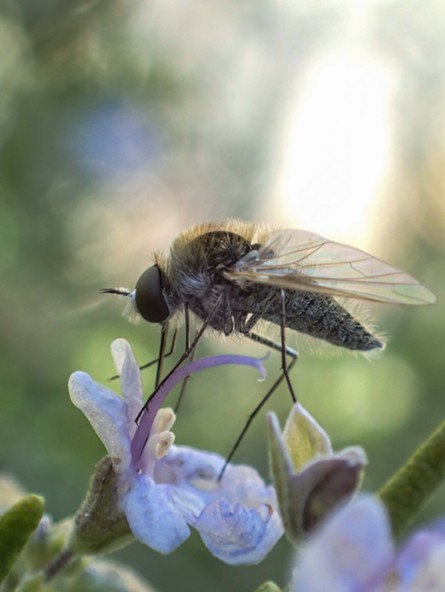 Unlike most days, today I had specific prey in mind. I was after a new photo of a bee fly to illustrate a point. Bombyliidae are a family of true flies (Diptera), which are extremely fuzzy and very agile fliers. Many are considered bee mimics. Adults sip nectar from flowers and are important pollinators. Their larvae are parsitoids, mainly of solitary bees. The adult female lays her eggs near the entrance of the bee's lair. When the larvae hatch out, they seek the nest and invade, eating the bee's eggs, larvae, and or the stores of food provided by the mother bee. Judging from the number I see locally, it is a very successful strategy. Worldwide, there are about 4,500 species known to science, and likely more than that, as yet undescribed.

Giving up on my patch of dandelions, I moved on to my garden. Suddenly, a large black and yellow insect buzzed by me straight for a peach tree with a few straggly blooms left after the recent heavy rains. At first I thought it was a bumble bee, but its flight was too quick and precise. Its body was a bit too long and tapered. Immediately I thought of a bee fly different than any I had seen to date. I got close, set up the camera and snapped away. As I did, I realized this was no bee or bee fly, but a moth I had only seen in books. After 26 snaps of the shutter, it left unscathed. The image I remembered was in the excellent local book, Insects of the Pacific Northwest by Peter and Judy Haggard. Sure enough, it is called a “bumble bee moth” (Hemaris diffinis).

So much for hunting a specific species, but like hunting you really never know what might turn up when you go out.