TL;DR: Five Things You Might Have Missed in This Weeks’ Cover Story 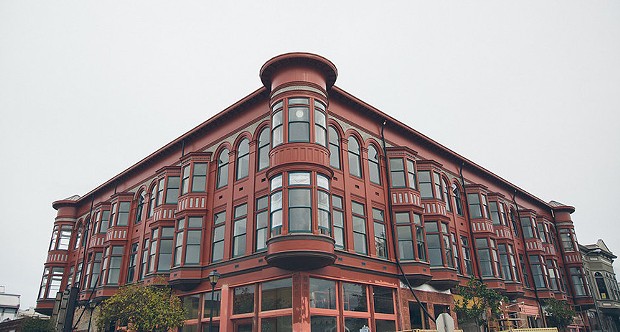 Busy week? We get it. Let us build you a scale model of this week’s main story. Here are some highlights from “Witness Marks.”

Eureka’s Carson Block building turns 124 years old this year, and she’s celebrating her long life by returning to her roots. A patchwork of grant and loan funding put together by the Northern California Indian Development Council – the building’s owner – has helped restore the 51,000-square-foot commercial building to its original beauty. But it’s no small task – a small army of architects, contractors, consultants and workers have been busy for the last year getting every last detail just right.

1. The Carson Block building was the first of its kind in Eureka. William Carson, a Canadian who moved to Humboldt in 1851 and made his fortune in the timber industry, began work on the Carson Block building in 1891, a period of recession for the region, and most of the United States. It was the largest commercial building of its size and also boasted an opulent 630-seat theater with a proscenium arch, a grand staircase and chandeliers. Carson named it the Ingomar Theatre, after his favorite play, Ingomar the Barbarian. As with the lavish Carson Mansion and its neighboring Pink Lady, Carson hoped the Carson Block building would set a standard of refinement for what was still a rather rough-and-tumble frontier town.

2. No one seems to know why the building was covered in stucco – but it was. Carson died in 1912 and in 1923 the building was sold. Historic documents are unclear as to exactly when the new owners decided to give the building a facelift, but a cream-colored stucco was applied to the building’s exterior, disguising many of the ornate features that gave her charm: bas-relief terracotta panels, wooden rosettes, river rock inlaid as a pebble dash above the bay windows. In 1958, one of the three turrets was also removed, and a neon sign installed in its place.

3. The NCIDC bought the building in 1986, and immediately wanted to restore the Ingomar Theatre, which had been gutted and split in half horizontally. But the 1989 Loma Prieta earthquake inspired more stringent seismic regulations, the cost of which was out of reach for the non-profit. So any aesthetic improvements would have to wait until the original unreinforced masonry could be reinforced with modern steel beams. After a few false starts, the project really took off in 2013, when the organization was able to piece together funding from the California Cultural and Historical Endowment, the Arcata Economic Development Corporation, Headwaters Fund, Redwood Region Economic Development Commission and Humboldt Area Foundation. The city of Eureka also secured a community development block grant. In total, the NCIDC has spent $11.5 million on the project to date.

4. Grant funding from the California Cultural and Historical Endowment required that the building be returned to as close as possible as its original state. Although the architectural team responsible for this task did a preliminary assessment, removing part of the stucco and looking at historic photos, they couldn’t know the extent of what lay underneath. What they found were witness marks of the building’s original grandeur — pieces of terra cotta paneling that had been smashed when the stucco was applied, shadows of the hand-carved wooden rosettes, a ghostly outline of the original metal fire escape. Most of these features (not the fire escape) were painstakingly reproduced using experts across several disciplines. In order to recreate the original turret, WoodLab Designs created a 3-D model then cut pieces of old growth redwood so they could fit exactly into the space.

5. Restoring the building took a lot of detective work. Bill Hole, a local consultant on the project and member of the Humboldt County Historical Society, has an eye for little details. The hand-carved redwood rosettes that appear above the building’s windows, for example, were recreated after Hole eyeballed the length of the shadow they cast in historic photographs and used his estimates to determine their size. Hole also looked closely at the river rock in the pebble dash and determined that the rock used to replace them should have a wider variety of color than the original choice, which was rock from the Mad River. Rock from the shores of the Van Duzen River was chosen instead.