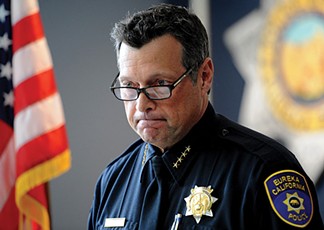 Eureka Police Department Chief Andy Mills and police chiefs from around the state met with Governor Jerry Brown on Thursday, March 17 at the 2016 California Police Chiefs Association Symposium to discuss Brown's November ballot initiative, which would ostensibly streamline the early release of nonviolent offenders from prison.

The proposal — allowing corrections officials to award points towards early release for good behavior — is the latest in a series of attempts at criminal justice reform Brown has undertaken since he took office in 2011. Then, facing a federal mandate to reduce the state's prison population, Brown spearheaded the realignment of California's criminal justice system, with non-violent offenders serving out sentences in jails rather than prisons.

This, according to critics, resulted in crowding of local jails, the early release of some offenders and the turning away of others. Many law enforcement officials have expressed frustration with realignment, attributing rising property crime rates to the changes.

Mills, who serves on the CPCA's board as a representative for the North Coast, said that he spoke out about challenges facing law enforcement in our region, saying that "infusing more prisoners into the communities isn't the best way to go."

"It was an interesting conversation," said Mills. "[Brown] was pretty straightforward with the chiefs. He needs to do this to get the prison population down and he doesn’t want us to fight him."

Mills said more research is needed into whether or not a rise in crime is directly attributable to realignment, but it appears that way to him. Brown's proposal would include some "positive mechanisms," he said, including treatment and counseling for some prisoners.

"It's more of a carrot than a stick program," said Mills, who said he would like the governor to provide more framework for oversight of released prisoners.

"With Proposition 47, there was supposed to be all this money coming out, but the mental health crisis continues unabated," said Mills. "Hardly any of that money went to law enforcement, yet we're the ones who deal with it 24/7."

Mills said these issues appear to be shared by departments throughout the state.

"If there is going to be increased expectations that law enforcement handle this, we need the resources," he said, referring to officers who respond to calls where people are having mental health crises.

"We respond to calls where people who are acting bizarrely, waving a knife around. We take them up to Sempervirens, then two hours later they’re out on the street again," he said. "It becomes a revolving door, that needs to be dealt with."

Increased savings from Prop. 47, passed in 2014, were projected to save the state around $100 million annually, but funding for treatment and education programs will not be available until later this year, in the form of competitive grants for counties. Brown's newest prison reform initiative is expected to be on November's ballot.