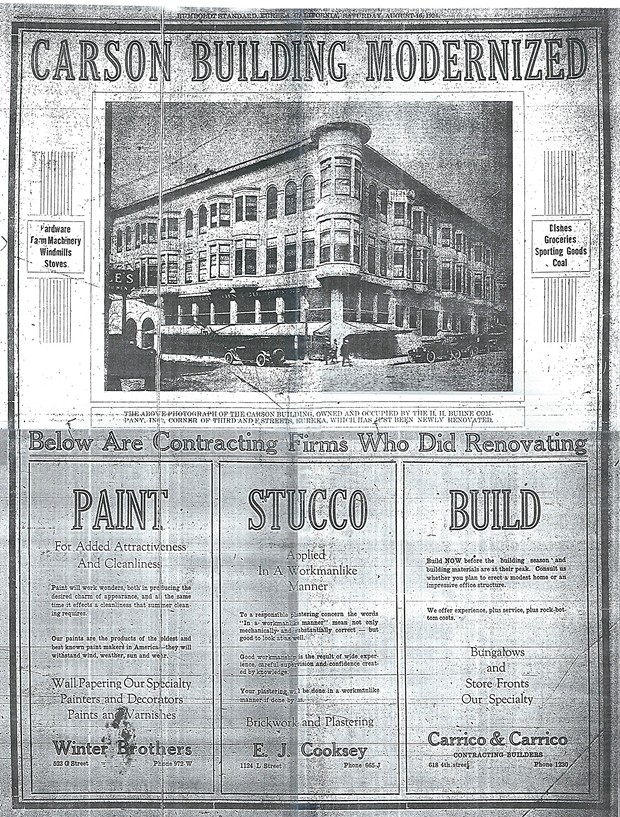 Local historian Bob Libershal was kind enough to come by the Journal office recently and deliver a copy of an article he found during his duties as archivist for the Eureka Heritage Society. The article, from June of 1924, sheds light on why the H.H. Buhne Company, which bought the Carson Block building from the Carson family in 1923, then chose to coat the gorgeous old building in stucco. A full page advertisement in the same newspaper, the Humboldt Standard, appeared two months later with the names of the contracting firms who did the renovation "in a workmanlike manner." Enjoy!

Staging is being built around the F and Third streets sides of the three-story Carson block, by the H.H. Buhne Company, owners of the building, who will expend between $3,000 and $4,000 in modernizing the two fronts. The architecture of the building will not be altered but after renewing most of the woodwork, which after 34 years naturally has become much weathered, the whole of the fronts will be covered with stucco which will give the appearance of a structure of stone.

Despite its age the building is yet one of the most substantial in the city, for with the exception of the F street frontage which is of ornamental wood work, the building is of brick, with unusually thick walls. Its original cost was $100,000, exclusive of the theater, which was fitted up on the second and third floors at an additional cost of $30,000.