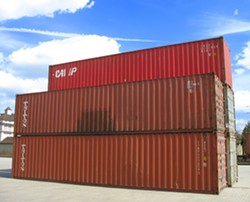 A solution for where to send those soon to be displaced from the Palco Marsh may be on the horizon. The press release (included below) is mysterious, merely inviting the public to attend a press conference to "announce the beginning of a partnership aimed at mitigating the effects of homelessness in the community and providing a temporary safe shelter for the current residents of the Palco Marsh."

But Betty Chinn was forthcoming about the new project, which is a collaboration between her foundation and the Humboldt Coalition for Property Rights.

"They have the money, I have the energy," she said, adding that she was approached by members of HumCPR only two weeks prior with a plan to put small shelters in the lot owned by Mercer Fraser at West Third and Commercial streets in Eureka, across from the St. Vincent de Paul free dining facility. The small shelters will be modified Connex storage containers, 14 by 8 feet, with two beds, windows and storage space. They will be open to up to 40 people to begin with and allow singles, couples, sex offenders and homeless people with dogs, all demographics excluded from current shelter housing options. Chinn added that HumCPR, the private corporation dedicated to protecting local property rights, would be taking care of the permitting process.

But an addtional hurdle remains: The Eureka City Council must add the project to its Shelter Crisis Resolution. Last week it voted 3-2 to modify the resolution to allow camping temporarily at a city-owned lot at Koster Street and to contract with St. Vincent de Paul to operate as a "warming center." Similar language will need to be added to the resolution to accommodate the joint venture between Chinn and HumCPR so it can bypass city building codes, according to City Clerk Pam Powell.

"Part of the shelter crisis resolution allows for health and safety codes to be lessened," said Powell. "Normally we wouldn’t allow these boxes without some accouterments. They still need basic lifesaving devices like smoke detectors, but they don’t need bathrooms."

The shelter crisis refers to city-owned property but, according to Powell, a workaround in which the city will lease the property from Mercer Fraser then lease it back to the Chinn-HumCPR partnership will meet these requirements.

More information about who will be supervising the site, the funders and regulations around the project should be forthcoming at tomorrow's press conference, to be held at 10 a.m. at the Betty Kwan Chinn Day Center.


From the Humboldt Coalition for Property Rights:

The Betty Kwan Chinn Homeless Foundation and Humboldt Coalition for Property Rights invite the public to a press conference at 10:00 a.m. on Wednesday, April 13, at the Betty Kwan Chinn Day Center, 133 Seventh Street in Eureka. The Betty Kwan Chinn Homeless Foundation and HUMCPR are excited to announce the beginning of a partnership aimed at mitigating the effects of homelessness in the community and providing a temporary safe shelter for the current residents of the Palco Marsh. Betty Chinn Day Center: (707) 407-3833. HUMCPR: (707) 268-8773.