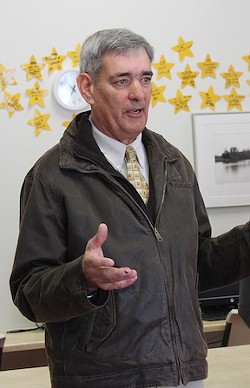 For the first time in 20 years, Eureka’s mayor has vetoed an ordinance passed by the city council.

Eureka Mayor Frank Jager sent the council a memorandum on Thursday advising that he is vetoing its April 5 vote to pass an ordinance requiring residents to have their lateral sewer lines — those connecting their houses to the main city line — inspected and, if needed, repaired. The ordinance, a similar version of which recently passed in Arcata, requires the inspections and repairs under several conditions, including whenever the property sells to a new owner.

But, citing concerns from real estate agents and homeowners, Jager wielded his seldom used veto power to send the bill back to the council for further consideration.

“I don’t feel the ordinance was vetted well with the community,” Jager wrote. “Other communities considering such an ordinance have held information workshops with the public and taken input from the real estate community. The impact of this ordinance on the homeowner is not a minor expense.”

The inspiration for the ordinance is that much of Eureka’s sewer system is old and deteriorating, with one staff report warning that some of the city’s older lateral connections might in fact be made of redwood piping. With some 10,000 lateral sewer connections in the city, the cumulative risk of failing connections is substantial, said Public Works Director Brian Gerving.

So staff recommended a multi-pronged plan to inspect and repair the city’s connections. First, the ordinance calls for the city to inspect and, if needed, repair lateral connections whenever it is conducting work on a neighborhood’s main line. Under this scenario, Gerving said property owners would have three options for paying for the work: They could simply pay for it upfront, or they could have the city loan them the funds and pay them back over the course of some years through increased sewer bills or they could have the city pay for the work upfront and then place a lien on the property, which would be repaid whenever it is sold.

The ordinance also requires people doing more than $25,000 of improvements to their properties to have their lines inspected and repaired. And, the last provision of the ordinance, is to require point-of-sale inspections and repairs any time a property changes hands. This is the part that seems to have drawn the ire of the local real estate community.

At the council’s April 5 meeting, it heard from a number of local agents who warned this was placing an undue burden on homeowners, many of whom will be shouldering the cost at an inopportune time in their lives, like when forced to move for employment reasons or when they’re downsizing in retirement. It’s also unfair, the said, noting that the work will be much cheaper to do when the city is working on the main line and someone selling a property might have to pay an exorbitant rate only to see their neighbors get the work done at a discount later when the city’s working in the area.

It’s important to remember, said local agent Jeff Ragan, that there are very few “cash-flush” sellers that could readily pay for the inspections and repairs, which some estimated could cost from a few thousand dollars all the way up to $20,000. (Gerving countered that het going rates are much more reasonable than that.)

But Gerving told the council that the city has 120 miles of pipes to maintain, and it’s going to take a while to do the mainline work throughout the city. Each of the strategies is needed to bring lateral sewer hookups into compliance, Gerving said, and to make sure the work gets done as soon as possible. Plus, he said, the point-of-sale requirement has been implemented in many cities throughout the state.

The council ultimately agreed, passing the ordinance with a 4-1 vote. Councilmember Marian Brady dissented, saying she wanted to see the point-of-sale requirement dropped.

Jager apparently agrees with Brady. Under the city’s municipal code, all ordinances passed by the council go to the mayor for approval. He then has 10 days to either sign the ordinance, making it law, let it pass without his signature or veto it and send it back to the council, which could then override the veto with a supermajority, four-fifths vote.

It’s a power the mayor of Eureka has historically seldom used, and which hasn’t been wielded since the mid-1990s, when then Mayor Nancy Flemming vetoed an ordinance that would have prohibited the city manager from giving council members any paperwork less than 24 hours prior to a council meeting. The council then failed to muster the votes needed to override the veto, and the ordinance never went into effect. At the time, Flemming told the Journal that, to her knowledge, it was the first time in the city’s history that its mayor had vetoed a bill.

City Clerk Pam Powell said the lateral sewer line ordinance is scheduled to come back before the council at its May 3 meeting. See the Jager's full memorandum from the council copied below and you can find a video of the council's April 5 meeting here.

MEMORANDUM
TO: Councilmembers Brady, Atkins, Bergel, Ciarabellini and Arroyo
FROM: Mayor Frank J. Jager
RE: Bill No. 909-C.S. “Sewer Lateral and Cleanouts”
DATE: April 14, 2016
Be advised per section 504 of the Eureka City Charter, I find it necessary to veto the above ordinance.
Since its passage by Council on April 5, 2016, I have heard from homeowners and the real estate community with major concerns. Even though it was notice most were unaware this ordinance was working its way through the system.
I don’t feel the ordinance was veted well with the community. Other communities considering such an ordinance have held information workshops with the public and taken input from the real estate community. The impact of this ordinance on the homeowner is not a minor expense.
I feel it needs to come back to Council for additional noticing and discussion.