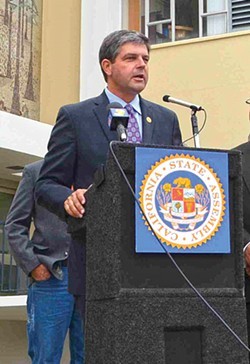 Politicians are just like us. Who hasn’t been given $460 tickets to a Warriors or Giants game from a powerful state union or private corporation?

The LA Times just released an article detailing the sports-related gifts handed to California lawmakers and there was our very own 2nd District Assemblyman Jim Wood, leading the state in single gift value.

The North Coast assemblyman tied one other state lawmaker for the most expensive gifted sporting event in the state last year, enjoying a $2,516 trip to the Governor’s Cup Golf Tournament at the little-known Pebble Beach golf resort. The journey, which was covered by the Governor’s Cup Foundation, exceeded the legal limit of the value of gifts to politicians by more than $2,000.

The loophole, whereby Wood appears to not have broken the law, is that the $460 limit can be exceeded by gifts from 501(c)(3) charitable organizations that cover travel costs or if the politician was traveling to deliver a speech or participating in a panel, the Times reports. According to Wood's declaration of the gift, he "Made a speech/panel."

But lest you think it was all fun and games, the Times points out there’s a caveat:
“Aside from offering majestic views of the Pacific during rounds of golf at Spy Glass Hill, the annual tournament hosts a roundtable discussion on ‘public policy, scientific and humanitarian issues,’" the article reads.

Check out the story and a database of sporting event gifts to state lawmakers compiled by the LA Times.

Side note: The value of Giants tickets given to California legislators nearly doubled the value of Dodgers tickets — $1,833 vs $938. That could be partly explained by the fact that AT&T Park is pricey — but let’s be real. If you’re courting a politician’s favor, you’re going to give them what they really want.