On Monday afternoon, local attorney Peter Martin and Eureka City Attorney Cyndy Day-Wilson got together for lunch. The topic of the day was a lawsuit Martin was working on and looking to bring against the city stemming from its ordering about 150 homeless people in the Palco Marsh to vacate the area by May 2.

Day-Wilson had reached out to Martin in the hopes of dissuading him from filing the lawsuit and, according to Martin, during lunch she explained to him that the city simply didn’t have any money to help relocate the soon-to-be-displaced marsh residents. “I’m always a little bit suspicious of government officials who tell me they don’t have any money, because it seems they have money for the things they deem important,” Martin said.

By the end of the day, Martin had filed a lawsuit in federal court on behalf of 11 plaintiffs, alleging the city was violating their constitutional rights and the protections of the federal Uniform Relocation Assistance Act. On the surface, the main tenet of Martin’s argument is a pretty simple one: By pushing people out of the marsh and enforcing its anti-camping ordinance when there isn’t enough shelter space to accommodate them, the city is illegally criminalizing homelessness and violating people’s rights. 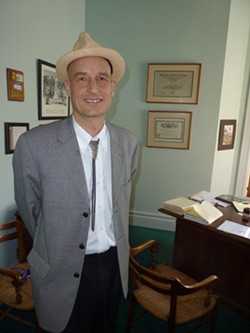 More specifically, Martin is arguing that the city’s actions will constitute cruel and unusual punishment under the Eighth Amendment of the U.S. Constitution and violate homeless people’s right to privacy and constitutional protections against unwarranted search and seizure. Additionally, Martin is arguing that because federal funds are being used for the first phase of the city’s waterfront trail project — which includes the tearing down of the old lumber kilns known as the Devil’s Playground and some trail building in the marsh area — the homeless people currently residing there should be entitled to funds to help them relocate.

The plaintiffs represented by Martin range in age from 23 to 57, with some having been born and raised in Humboldt County and others being relatively recent transplants, according to the suit. They report having lived in the PalCo Marsh from six months to 10 years.

Martin’s argument that criminalizing homelessness constitutes cruel and unusual punishment is not new, and is one that has been gaining traction around the country, most notably when the U.S. Department of Justice weighed in on a federal lawsuit last year. In that case, Janet Bell v. the City of Boise, the DOJ stepped in to opine that if a municipality enforces ordinances making it illegal to sleep or camp in public when it has inadequate shelter space to accommodate the entire homeless population — or the available space has restrictions that disqualify certain groups of homeless individuals — then it’s criminalizing the status of being homeless in violation of Eighth Amendment rights. (The Boise case was ultimately decided in the city’s favor, in part, because some of the plaintiffs had found housing after the case’s filing and were no longer homeless, causing the court to find they no longer had standing to bring the case.)

In his suit, Martin is seeking a temporary restraining order preventing Eureka from following through with its planned May 2 eviction and from enforcing the anti-camping provisions of its municipal code on anyone residing in the marsh. Further, Martin is seeking a reimbursement of attorneys fees and costs in bringing the suit, as well as any other relief the court “deems just and proper.” In a phone interview, Martin said potential damages in the case under the Uniform Relocation Assistance Act could include up to 42 months of housing expenses for his plaintiffs.

It’s worth noting that the Uniform Relocation Assistance Act only applies to federal projects, and Eureka Mayor Frank Jager told the Journal no federal funds are being spent on the trail project. Martin, however, alleges in the suit that the funds used for the trail project have traveled a convoluted path, having been re-purposed and re-allocated several times. But, Martin contends (beginning on page 66 of the suit, which is in PDF form below) that some of the project funds originated from the “Eureka Non-Freeway Alternative project” and are, in fact, federal.

Because Martin is asking for immediate intervention to prevent the planned May 2 eviction, a federal judge in Oakland has set the matter for a hearing Friday afternoon. (While the matter could have been heard before a federal judge locally, Martin said he opted for Oakland instead: “The courts up here are too close to the issue. We wanted somebody from out of the area to decide this.”)

Eureka Mayor Frank Jager said he was disappointed to learn of the suit. “It’s kind of what I’d expect from a marginal attorney who’s trying to make a name for himself, but it’s really disappointing. Peter should be working with us and helping us, not fighting us. We’re trying to do the best we can with a horrible situation, and we’re not getting help from the people we need to get help from.”

Jager added that, with the deplorable environmental conditions associated with the PalCo Marsh encampments, he hoped attorneys like Martin, entities like the California Coastal Commission and environmental groups like Humboldt Baykeeper would have helped find solutions, but that has not been the case.

Martin countered that he’s seen a number of groups — including a variety of homeless advocates — attempt to work with the city over the past year on the issue. “Frankly it hasn’t been successful,” Martin said. “What have they done? They haven’t put up a cent of public money [to help people transition out of the marsh]. All they’ve done is have the police go down there on a twice-daily basis to harass my plaintiffs. I’m not happy, and I think they’re conduct leaves much to be desired.”

For his part, Jager said Martin’s plaintiffs — and the other 100 or so people down in the marsh — are trespassing on city property, “impacting sensitive wildlife,” creating a health hazard and have been recalcitrant in the face of helping hands.

“There are plenty of places for these people to go, and plenty of help for those who want it,” Jager said, pointing to the Eureka Rescue Mission, the city-sanctioned camping area at Koster and Washington streets, the recently transitioned Multiple Assistance Center and local philanthropist Betty Chinn as avenues for folks to move out of the marsh. “They don’t want help; they just want handouts.”

Jager’s contention that there are plenty of places for folks currently living in the marsh to go if they choose seems likely to cut to the heart of Martin’s lawsuit. Martin contends that if all the people living in the marsh immediately sought the shelter beds provided, there wouldn’t be enough to go around. Further, he contends that some shelters’ requirements that people staying there have a photo identification and be sober, coupled with some shelters’ religious programs, effectively shut out segments of the local homeless population.

Over the phone, Martin said he realizes that we live in a capitalistic society that leaves some at the bottom without housing. His stance is that Eureka has some obligation to “find housing for people who can’t provide housing for themselves.”

“The city can find a few hundred grand so the bottom can live in dignity,” he continued. “If they can’t find their priorities in order to do that, well, maybe a federal judge will tell them they’ve fallen below minimum standards.”

Jager said the suit is just “a shame,” and lamented the fact that “this issue” has eaten up staff time over the past year to the detriment of other city functions. The mayor said he’d like to see the entire community — and especially those, like Martin, advocating on behalf of the homeless — do more.

“You’ve got a dozen or more homeless advocates who have homes and property all over town,” Jager said. “They should be taking these people in and housing them.”