There were more reporters, police and clergy than homeless people in the PalCo Marsh this morning as the City of Eureka made a final sweep of the area, forcibly evicting those remaining in the camps. As of 7:30 a.m. at least half of the residents remained, according to accounts, despite repeated warnings over the last few weeks that they would be arrested.

"We're procrastinators," said Jeffrey Valkanoff, who stood at the Del Norte pier with his belongings and his dog Tracker. Valkanoff said that he would probably go the shipping container village being overseen by Betty Chinn, despite his initial reservations. " I didn't want to go, but I went to the orientation yesterday and the more I found out about it, the more I liked it."

The village had 22 people stay last night, a little over half of its projected occupancy. Its operation and lease agreements were finally signed on Saturday afternoon. Betty Chinn also returned to the marsh this morning, checking in with people and encouraging them to come down. 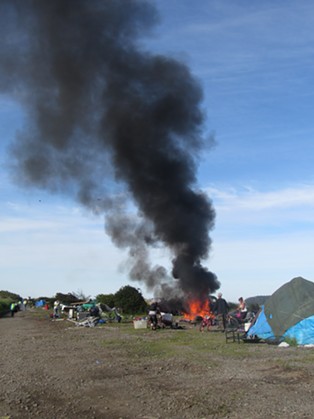 Inside the encampment there was a sense of urgency and chaos as people loaded their belongings onto carts and bikes, or carried them out in their arms. Two women lit a large garbage fire in protest, tossing their remaining belongings onto the flames and sending a plume of black smoke into the sky. The muddy trails swarmed with reporters from multiple media outlets, wearing the required yellow vests and snapping photos of desperate people as they pushed overburdened bikes into the parking lot.

In the parking lot, the city set up an incident command center with law enforcement agencies and several dozen uniformed officers. Humboldt Bay Fire and an ambulance were on the scene. A few officers sprayed themselves down with insect repellent. Chief Andy Mills and Captain Steve Watson used all-terrain vehicles to zip around and survey the terrain. Officers were outfitted with parcel maps of the camps, which had been divided into sections and their occupants documented. After making sure there were no remaining occupants, the officers systematically dismantled the camps, extinguishing smoldering campfires and disposing of remaining items with the help of inmates from the Sheriff's Work Alternative Program. Some items are going into storage for residents to retrieve later.

As of this update, only one arrest had been made, a woman protesting in the parking lot, though we were unable to reach the Eureka Police Department's public information officer for more details. Per an order signed by the U.S. District Judge this morning, the 11 people named in attorney Peter Martin's lawsuit against the city were contacted by a representative from his office and informed they have several options for shelter, including the Serenity Inn, Multiple Assistance Center or container village, but they did not have the option to stay.

We will update as we have more information. 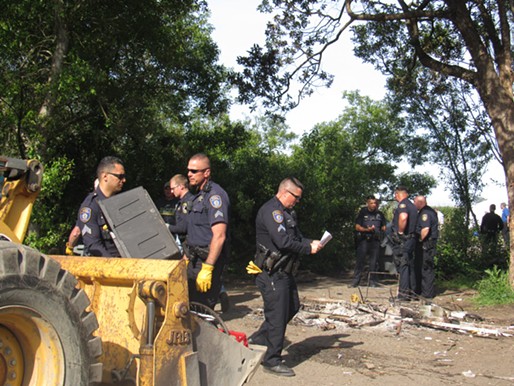