Reminder: Humboldt Bay's Entrance is Unpredictable and Dangerous Due to Shoaling 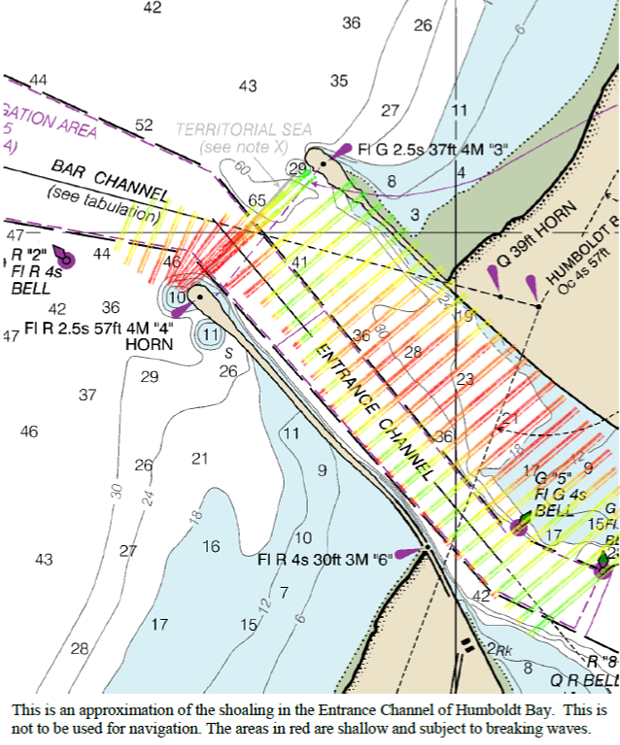 The dangerous shoaling off the entrance to Humboldt Bay, which the Journal reported on in April, remains of great concern to the sheriff's office, which sent out a press release today reminding boaters of the shallow waters and hazardous new breaks the sediment has caused.

Army Corps of Engineers dredging is scheduled to start in two weeks and last about a month.

Sheriff Downey would like to advise the public of the dangerous conditions near the Humboldt Bay Bar entrance during the upcoming Halibut and Salmon fishing season.

The condition of the Humboldt Bay Harbor entrance has changed for the worse due to shoaling of the Channel due to the strong winter storms. The Humboldt Bay Entrance Channel is very shallow in the area most boaters use for entering and exiting the bay. This condition has created dangerous and unpredictable conditions on the bar and entrance channel. Waves can break at any time and it does not matter what the tide flow is. Use extreme caution and if conditions appear bad, do not cross the bay entrance.

Emergency dredging is scheduled to begin May 20, 2016. It will take 25-35 days of work to restore the entrance to 48’ deep. Check the marine forecast and plan accordingly. Do not take chances.

For updates, check the Humboldt Harbor Safety website at humboldtharborsafety.org.