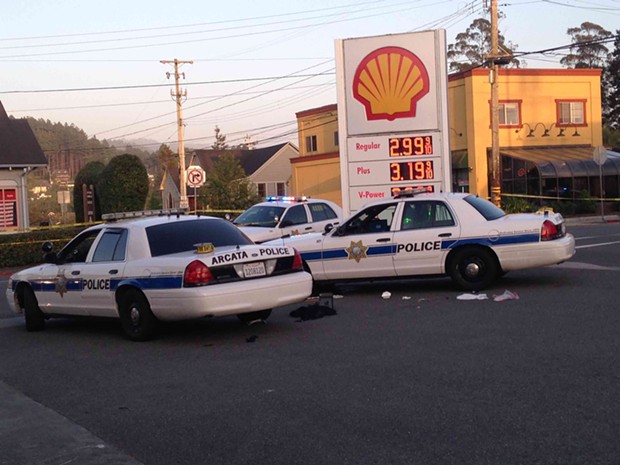 3rd UPDATE:
The Arcata Police Department held a press release this afternoon to release more information about yesterday's officer involved shooting. The suspect, who was shot four times after allegedly charging an officer while wielding a metal cane, remains in stable but critical condition. See the full press release at the bottom of this post for more information.

2nd UPDATE:
The Arcata Police Department issued a press release late last night noting that the suspect's condition has been upgraded to stable but critical. See the full release copied at the bottom of this post.

1st UPDATE:
Arcata Police Chief Tom Chapman said the suspect is in critical condition at a local hospital and going into surgery shortly after sustaining at least one gunshot wound to the lower abdomen.

Chapman said police were called to the Shell Station at the corner of 14th and G streets at 6:43 p.m. to a report of a man drinking alcohol from an open container.

Shell clerk Russell Plocher said he’s the one who made that call to police. Plocher said the man — dressed in a large black sweatshirt with a hood pulled over his face, wearing sunglasses and carrying both a long wooden stick and a metal cane — had come into the store around 6 p.m. and was acting strangely. Plocher said the man purchased some beer, left the store and then began drinking in the parking lot.

Plocher said he went outside to tell the man he needed to leave the premises, at which point the man stood up and began swinging the cane and stick, almost like martial arts weapons. At that point, Plocher said he went back inside and called police.

When officers arrived about 10 minutes later, Plocher said the man was sitting on the brick base of the Shell sign at the corner of 14th and G streets, drinking. “When they rolled up, he stood up and started waving the sticks,” Plocher said. The two officers calmly told the man to put the sticks down, Plocher said, at which point the man became enraged. “He just yelled, ‘Fuck you. Ahhhh,’” Plocher said. “He just starts yelling, like the Hulk.”

Plocher said the man started swinging the sticks and moved aggressively toward one of the officers. Plocher said he then heard three gunshots and saw the man fall to the ground. “They did what they had to do,” Plocher said, adding that he believed both officers fired their weapons and that they must have shot the man with rubber bullets because he didn’t see any blood.

As the officers stood over the suspect directing him to stay down, the man tried to get up briefly but crumpled to the ground, Plocher said. Within a minute, Plocher said a University Police Department officer arrived on scene and began administering first aid. Minutes later, an ambulance arrived and the man was transported to the hospital.

Chapman said he believes one officer fired his handgun at the suspect “at least twice” as the other officer on scene was simultaneously trying to deploy his Taser. The suspect was conscious and alert when transported to the hospital, Chapman said.

Neither the identities of the officers involved nor that of the suspect are being released at this point. The shooting is being investigated by the multi-agency Critical Incident Response Team and Chapman said he expects more information to be released later tonight.


PREVIOUSLY:
A suspect has been hospitalized with at least one gunshot wound following an officer involved shooting in Arcata this evening.

Arcata Police Chief Tom Chapman says the man's condition is unknown at this time, and that there is no further threat to the community. Officers responded to 14th and G streets in Arcata shortly before 7 p.m. today.

It's unclear what led to the shooting, but Chapman said no officers were injured. The shooting appears to have occurred in the Shell gas station on the northwest corner of the intersection.

It's unclear how many officers fired weapons. Chapman said more information will be released later this evening. The county's critical incident response team is on scene and investigating.

Photos from the scene taken by Thadeus Greenson: 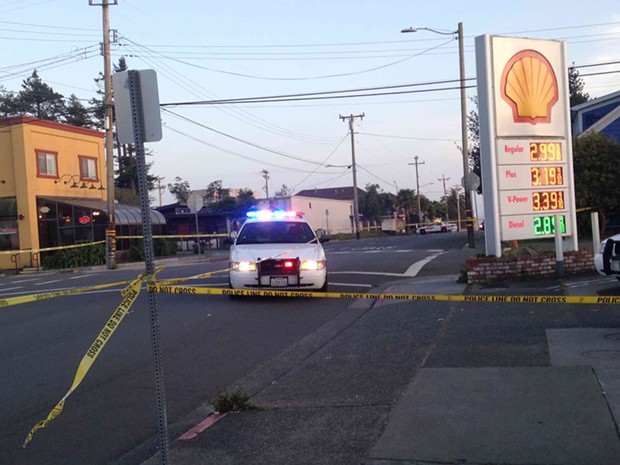 FOR IMMEDIATE RELEASE
OFFICER INVOLVED SHOOTING
On May 17, 2016 at 6:43pm, officers from the Arcata Police Department responded to the corner of 14th and G Streets after a citizen reported a man drinking alcohol from an open container and swinging two sticks in an aggressive manner.

Two APD officers arrived at 6:51pm where they encountered the 26-year-old male. Civilian witnesses said the male was swinging a 3' long wooden stick and a metal cane in a martial arts style as he aggressively approached the officers.

At 6:54pm one APD officer deployed a taser that had no affect on the man. Moments later, an APD officer discharged their firearm striking the man.

Once the male was subdued, officers began life saving efforts and immediately called for an ambulance. At approximately 6:58pm an ambulance arrived on scene. The man was transported to a local hospital where he underwent surgery. His condition is stable, but critical.

Anyone with information about this case is encouraged to contact the Arcata Police Department at 822-2428.

An update will be released in the afternoon of 5/18.

FOR IMMEDIATE RELEASE
OFFICER INVOLVED SHOOTING INVESTIGATION UPDATE - 5/18/16
On May 17, 2016 at 6:43pm, officers from the Arcata Police Department responded to the corner of 14th and G Streets after a citizen reported a man drinking alcohol from an open container and swinging two sticks in an aggressive manner.

Two APD officers arrived at 6:51pm where they encountered the 26-year-old man at the corner. Civilian witnesses, in-car camera footage from three police cars and surveillance footage confirmed the man was in possession of two weapons, a 3' long wooden stick, similar to a thick dowel and a metal cane. The man had a weapon in each hand and was aggressively swinging the weapons in a martial arts style.

At 6:54pm, moments after the discharge of the taser, while under attack, a police officer discharged his firearm in rapid succession four times, striking the man. The man sustained one gunshot wound to his right arm, one to his right leg and two gunshot wounds to his torso.

Once the man was subdued, officers began life saving efforts and immediately called for an ambulance. At approximately 6:58pm an ambulance arrived on scene. The man was transported to a local hospital where he underwent surgery. He remains in critical, but stable condition.

As is standard protocol, both police officers have been placed on administrative leave. The identity of the involved police officers will be released within the next day.

At the conclusion of the investigation conducted by CIRT, their investigation will be submitted to the Humboldt County District Attorney.