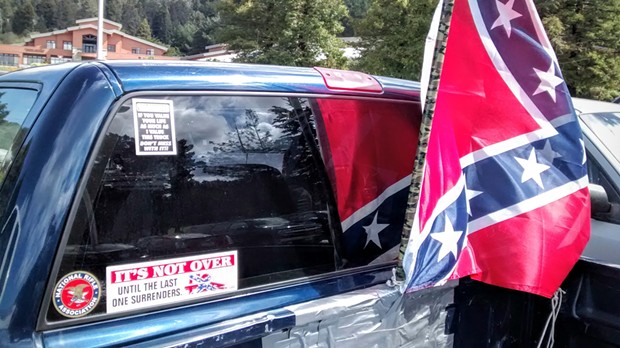 A ban on using federal taxpayer funds to fly Confederate flags in military cemeteries is one step closer to implementation. North Coast Congressman Jared Huffman's office announced today that the amendment he helped introduce to the 2017 Veteran's Affairs funding bill has been passed through the House of Representatives. Many Southern Republicans balked at a similar Huffman-proposed amendment tacked onto a Senate appropriations bill last year, ultimately sinking the legislation, but this year's bill appears to have more widespread support, passing through the House with a 265-159 vote. The original legislation came in the wake of a growing controversy around this symbol of the Confederacy after a stars-and-bars waving white extremist shot and killed nine black churchgoers in Charleston, South Carolina, in June of 2015. Although many people are still fond of the Confederate battle flag as a symbol of Southern heritage, Huffman insists that it has no place in our "sacred national cemeteries," referring to it as "hateful," and a representation of "slavery, war, lynchings, and tragedy."

Last year the Journal published a three-part series about racism in our region. You can find that series here, here and here.

WASHINGTON, D.C.— Today, the House of Representatives passed an amendment to the 2017 VA funding bill that will prohibit federal taxpayer funds from being used to fly the Confederate battle flag at cemeteries operated by the Department of Veterans Affairs (VA). The VA currently permits the display of the Confederate flag on Memorial Day as well as on Confederate Memorial Day at 131 facilities.

Rep. Jared Huffman said, “While I appreciate that today's vote represents progress, it is shameful that two thirds of the House Republican Caucus voted against this commonsense measure. Why would anyone in Congress – let alone a majority of the governing party – still condone displays of this hateful symbol on our sacred national cemeteries? Symbols like the Confederate battle flag have meaning. They are not just neutral historical symbols of pride, they represent slavery, war, lynchings, and tragedy. To continue to allow national policy condoning the display of the Confederate battle flag on federal property would be wrong and disrespectful to our past. Even General Robert E. Lee recognized that symbols of the Confederacy are symbols of treason—which is why he asked that they not appear in his funeral. I am grateful that a majority of the House agreed today to be at least as forward-looking as Robert E. Lee was in 1869. Let’s continue to move in the direction of reconciliation, unity, and justice.”

Rep. Keith Ellison said, “For decades, the Confederate battle flag has been the symbol of racist groups and individuals like the Ku Klux Klan and Dylann Roof, who murdered 9 worshipers at Mother Emanuel AME Church in Charleston, South Carolina. But the Confederate battle flag is also a symbol of treason. We cannot forget the 2,500 Minnesotans who died during the Civil War fighting for liberty and freedom, whose opponents carried the very flag which some Republicans want flown today. These brave Americans gave their lives opposing everything the Confederate battle flag represented- the desire to hold human beings as property across our country and keep them in bondage until the end of time. All Minnesotans owe these brave Americans a solemn debt. We should ensure that the flag that their enemies carried so proudly does not fly above their graves.”