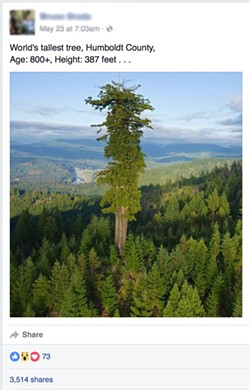 If you’ve logged on to Facebook in the last couple days, you’ve probably seen that photo to the right. It’s real, it’s beautiful and it’s in Humboldt County. It’s not, however, the tallest tree in the world.

For whatever reason, the picture has been circulating like crazy lately, and it seems to always be accompanied by a misleading or flat-out wrong caption. There could be a whole study of the virality of images and misinformation conducted about it, but, being stuffy, old truth-seekers, we just wanted to set the record straight.

The photo is actually of an unnamed coastal redwood in Southern Humboldt County somewhere east-ish of Weott. Here’s the original caption:

It was taken by Michael Nichols for National Geographic and was part of the redwoods spread that came out in October of 2009.

Here’s a slideshow with other photos Nichols captured at the time. They’re gorgeous and worth looking at. (We wanted to feature the picture in this blog post, but National Geographic charges a $200 licensing fee that they're "unable" to waive. They must be raking in the cash from those thousands of Facebook pages it appears on ...)

As far as the tallest tree in the world, that honor still belongs to “Hyperion,” which rises 379.1 feet out of Redwood National Park land. Its exact location is somewhat of a secret, but it’s in the old-growth forests of the Redwood Creek Basin northeast of Orick.

The tree in the photo is unnamed, and those statistics don’t apply to Hyperion or its most famous counterpart, the Stratosphere Giant, which held the rank of tallest tree until researchers confirmed Hyperion’s height in 2006. (Here’s a picture of Stratosphere Giant from NPR. As you can see, it’s surrounded by trees nearly its size. Clearly not the one from Nichols’ photo.)

Photos and rumors about tall trees have circulated the far reaches of the Internet for years. That won’t change, and hey, it shouldn’t. We are home to the tallest trees in the world. But let’s do our best to represent our natural wonders accurately.