There were more jeans than heels, and half the parking lot was filled with pickup trucks. The line of cars stretched down the small main street of Fields Landing, and the parking lot in front of the boat launch named in honor of the man everyone knew as Jimmy filled with mourners. A strong, persistent wind made the microphone hum and the speakers wobble. It was a good wind, the kind his friends said Jimmy would say was good for the salmon. It was the kind of day that brought the smell of the sea into your lungs, the kind Jimmy Smith would have liked.

Rex Bohn, who filled Smith’s seat representing the 1st District on the Humboldt County Board of Supervisors when Smith stepped down in 2012 due to health problems, was one of the first speakers. He said that he and other officials bent some rules in order to dedicate the ramp to his predecessor in 2014.

“We broke procedure policy, we didn’t ask anybody, we just did it,” Bohn said, spurring the audience to applaud. Of course, the decision was voted in unanimously at the next board meeting. Smith, everyone agreed, was a rare kind of politician, the kind who united people who normally wouldn’t come together.

Third District Supervisor Mark Lovelace, who served on the board with Smith for four years, said privately that it took him a while to figure out his colleague’s method. For Smith, it was all about compromise.

“For a long time we were perceived as kind of a 2-2 board with Jimmy in the middle. But after a while, I realized that the last thing he’s going to do is stick a 3-2 crown on an issue. He’d hold out until the winning side would accommodate some things. He wanted a 4-1. Or a 5-0.”

Smith was dedicated to the preservation of wetlands, to rural communities, to knowing as much about what was going on in Humboldt as possible. Loretta Sands (formerly Loretta Nickolaus), a former county administrative officer and Jimmy’s “sister from another mister” spoke with reverence about her colleague and friend’s humility, about how during difficult financial times for the county, he demanded a cut in his salary.

“He never asked for reimbursement, never used a company car. It was his pleasure to serve,” Sands said. “He led by example. He’d do just about anything for anybody.”

Sands said, and everyone nodded, that the world would be a better place if everyone were a little more like Jimmy.

Other speakers talked about his dedication, how he never stopped working, about his yellow lined pads on which he’d write lists of things to do, checking them off one by one, about how he kept a garage so neat and clean you could eat off the floor. They spoke often of his wife, Jacque, who after 40 years of marriage Smith would still sometimes sigh about, saying, “Isn’t she cute?”

Smith’s many trips to rural parts of the county, his willingness to always take a phone call or buy dinner for a friend, to offer advice and champion for those who requested his help, would take him away from his beloved Jacque for long lengths of time. Bohn thanked her for nursing him in his final years, and for sharing him with the public. 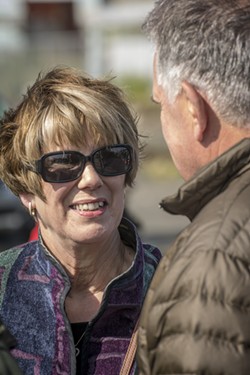 “Jacque, you shared him like no other person,” Bohn said. The audience clapped again. “We’re all better for having known him. I’m a better person for having known him” Bohn continued, adding that he often met Smith for breakfast and asked him for advice.

In the crowd, men dressed in baseball caps and Carharrts, fishermen and firefighters, lifted their sunglasses to carefully wipe their eyes. Couples leaned against one another for comfort and shelter from the wind. Jimmy’s widow sobbed next to the podium. Their son, Gary, proudly wore his father’s favorite hat, which was autographed by members of the television show The Deadliest Catch.

North Coast Congressman Jared Huffman, who drove from Sacramento to attend the memorial, shared his first impressions of Smith, who said he would endorse Huffman under realignment if his friend and the North Coast's former representative, Congressman Mike Thompson, also endorsed him. For the next few months, Huffman told the crowd, he was put through the paces. He met with multiple groups, multiple people, all over Humboldt County, what he called a “Humboldt County boot camp.” He said he knew that it was due to Smith’s prodding, that Smith thought it was important he knew the place he was representing. And when Smith gave his approval, Huffman received the full benefit of his influence, with support from all sides rolling in.

“One of the things I most appreciated about Jimmy is that his word was his bond,” said Huffman. “His reputation was just golden. He taught us that we need to treat other people, whether they agree with us or not, with respect. Wouldn’t politics be a lot better if we all did that?”

"I don't know where the souls of really good people like Jimmy go when they die," said Huffman. "But I hope the rivers are cold and clean, the salmon are thick and the ocean is calm." 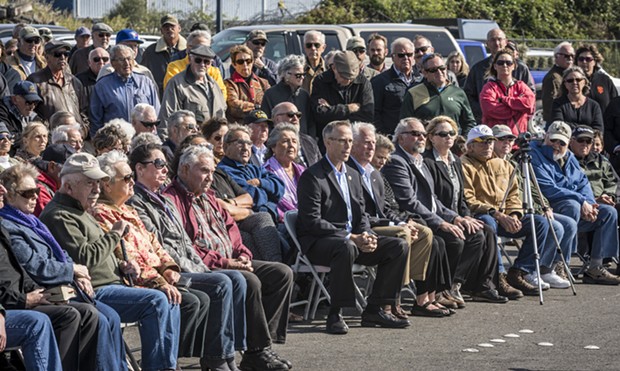 The speakers in the ceremony were split evenly between friends and colleagues, but it was clear from their anecdotes and warmth that Smith had a way of blurring that line. One person who embodied both roles was Thompson, who often went hunting and fishing with his late friend.

“I’m very, very proud to be here,” said Thompson when he got up to the podium, his voice colored with a sob at the bottom of his throat. “Jimmy was a different kind of politician. He was hard-working. He was humble. He knew people and he understood people. He was respectful to a fault. People respected him. I don’t know anyone who had a bad word to say about him. I’m honored to have known him. When we first met, we just clicked. I knew we were going to be friends."

Thompson echoed what had been said earlier, that the world would be a better place if everyone were a little more like Jimmy.

“Make sure that you matter. He did that,” Thompson said. “Everything he did improved life for everybody else. We should all do that.”

After a prayer and several readings from the Bible, the ceremony closed with a rendition of Amazing Grace (My Chains Are Gone). As the last notes faded and the singer began to leave the stage, before the crowd could begin to speak again, the wind caught the unattended microphone and added its own voice to the proceedings – a low rush of sound, a hum. It was the kind of quiet moment you get before the fish takes the bait or you snap the perfect shot on a duck, the kind of moment Jimmy would have liked, and the kind he had too little of as he sacrificed his time to service.