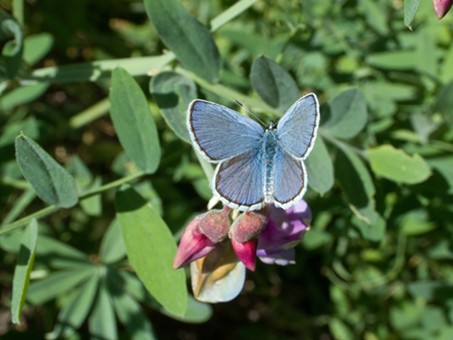 While most everyone is delighted by the recent rains, I await warmer weather. Since insects are ectothermic (cold blooded) they maintain a low profile when it's cold. In the brief sunny interludes we've had recently, I've seen California hairstreaks, Acmon blues, and several other small, blue to gray butterflies that didn't hang around long enough to get either a good photo or an ID. 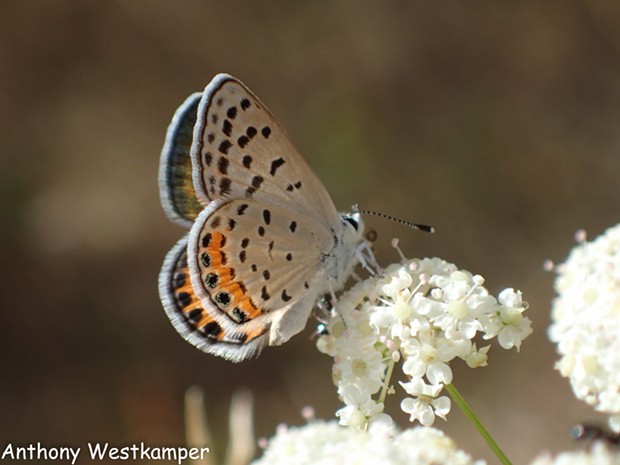 In my favorite butterfly book, California Butterflies by John S. Garth and J.W. Tilden, there are more pages devoted to these small butterflies than any others.

Smaller than my thumbnail (family Lycaenidae) they are among the most common and overlooked beauties in the butterfly world. They are quick, nervous and often taunt me by flying by without landing.
In my experience butterflies land for six main reasons; to feed, usually on flowers from which they sip nectar (sometimes on other things like rotting fruit or even animal droppings from which they extract minerals and nutrients not available in nectar); to sip water from damp patches; to display, usually resting with their wings open or flexing them open and closed in a slow rhythm to attract members of the opposite sex; to roost for the night or to weather cold spells; to regulate their temperature basking in sunshine to warm up or avoiding it to keep cooler in hot weather; finally, to lay eggs.

The caterpillars of these tiny butterflies are often hump shaped with a flattened bottom making them look like little green slugs. Some form complex symbiotic relationships with certain species of ants.
It is believed the Xerces blue (Glaucopsyche xerces), native to the Sunset District of San Francisco, was driven into extinction by the disruption of such a relationship. The Xerces Society, which is dedicated to the preservation of invertebrate species, was named in its memory.