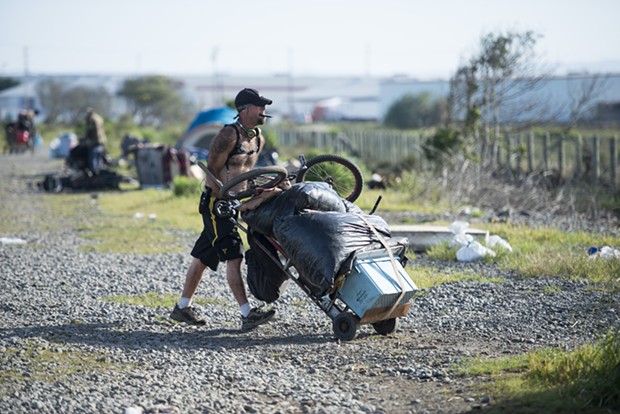 The Eureka City Council will consider amending its recent shelter crisis declaration again Tuesday, this time to allow for a rotating free camping area for homeless people with nowhere else to go.

Currently, the city is allowing homeless people to camp in the city-owned parking lot on the corner of Koster and Washington streets during nighttime hours, as long as they pack up their stuff and leave shortly after daybreak. Now staff is proposing that, beginning June 11, the free-camping zone rotate every 30 days between the Koster and Washington property and two others: the parking lot at the foot of Del Norte Street and what the city refers to as the Dinsmore property, a vacant stretch of land near Target between the Multiple Assistance Center and Blue Ox Mill Works.

Both Eureka City Manager Greg Sparks and Police Chief Andrew Mills said the move is aimed at spreading out the impacts of the free-camping area and keeping the homeless people using it from getting too comfortable or entrenched in any one location. The proposed amendment doesn’t specify when, or if, the rotating free camping zone will end. The city first opened up the Koster and Washington property when it was preparing to clear the PalCo Marsh of more than 100 homeless camps and some questioned whether the city could push homeless people out of the marsh if it didn’t provide them with another place to go that wasn’t subject to the city’s no-camping ordinance. (That question ultimately spawned a federal lawsuit, despite the city's opting not to enforce its no-camping laws at the Koster and Washington lot.)

In the "City Manager's Column" in the city's June newsletter, Sparks wrote that about 35 people have been taking care of the free camping zone nightly at Koster and Washington. "This has not worked particularly well, due in large part to the lack of a day use area that could accommodate the need to be somewhere," Sparks wrote, adding that more and more people are spending their days hanging out on West Third Street near St. Vincent de Paul's free dining facility near Old Town.

Sparks notes in his message that clearing the Marsh did not "solve homelessness in Eureka" and that the city is witnessing "a combination of successful and negative outcomes." The negative outcome is the dispersion of homeless people from the marsh into other areas of the city — neighborhoods, business districts and other greenbelts. The only successful outcome Sparks mentioned in the message is the partnership between Betty Chinn and the Humboldt Coalition for Property Rights that converted large metal shipping containers into temporary living quarters for 40 people in a vacant lot on West Third Street. "This project has been an excellent example of the private sector getting involved to solve a problem," Sparks wrote. 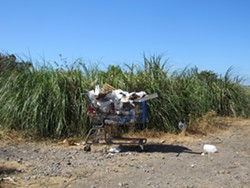 In other matters, staff is recommending that the council amend its shopping cart ordinance to charge a $20 fee for returning a shopping cart to its lawful owner. Back in 2014, the council approved the ordinance in an attempt to regulate abandoned or stolen shopping carts, get them out of the hands of homeless people and back to their legal owners. The ordinance has been successful in reducing the number of carts around town, according to a staff report.

However, the existing ordinance allows cart owners a 72-hour grace period to pick up a cart found around town before facing a fee. Staff now wants that changed to make sure the city recoups the costs of recovering and storing carts and is suggesting the $20-per-cart fee.

To read more about these and other items, check out the city’s full agenda here. And click the PDF below to see the city's full June newsletter.