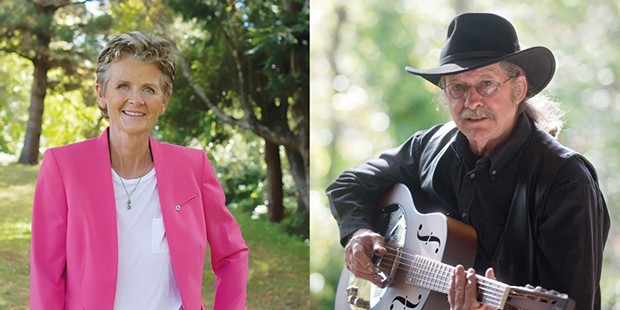 While there are still votes to be tallied, the final election night count has Fennell finishing with 3,503 of the 4,563 votes cast in the race.

Fennell now has 2,480 votes to Rogers’ 693, having dominated both the early vote counts and the Election Day turnouts by more than 50-point margins.

Fennell has largely retained her early lead, now holding 77.5 percent of the vote to Rogers’ 22 percent with 2,436 votes cast in the contest. So far, Fennell has taken 74 percent of the Election Day vote, a slight drop off from the 78 percent of the early ballots she took in the first election night report. There are still plenty of votes to be counted — the race saw a total of 6,950 ballots cast four years ago — but Fennell’s lead is looking insurmountable.

PREVIOUSLY:
Incumbent 2nd District Humboldt County Supervisor Estelle Fennell has leapt out to a commanding early lead in in her re-election bid, taking 78 percent of the first batch of ballots cast in the race that sees her pitted against challenger Glen "Bud" Rogers.

Fennell has taken 1,546 of the 1,974 ballots counted thus far — all vote-by-mail ballots that showed up early to the Elections Office or those cast in person in the office prior to Election Day.

Fennell, who edged out incumbent Clif Clendenen to take her board seat in 2012, made a name for herself locally serving as news director at KMUD for 17 years. Then, Fennell worked as the executive director of the Humboldt Coalition for Property Rights for three before making a run for supervisor.

She’s campaigned largely on her experience in the position, saying she’s set up office hours in Garberville and Fortuna, helped facilitate the Supervisors’ first ever official meeting in Redway and worked to get Supes meetings live-streamed in Southern Humboldt, all to make her more accessible to her constituents. Fennell has also made a point of trumpeting her work to benefit the 2nd District directly, noting her work to repair the Garberville library, permit the Southern Humboldt Community Park, secure funding for a water tank in Fortuna and to clear fire hazards in the Bear Canyon area north of Garberville.

Rogers, a Vietnam veteran from the San Joaquin Valley and substitute teacher turned banjo maker and KMUD DJ, meanwhile has kept a hyper local focus in his second run for a board seat. (His first ended unsuccessfully in 2004, with a loss to incumbent Roger Rodoni.) Rogers has focused on bringing new ideas to the board, like creating tiny home villages for the homeless, morphing Humboldt into a charter county with a public bank and exercising more autonomy to take on big issues, like chemtrails — the alleged control of the weather and populace via the secret distribution of hazardous chemicals into the atmosphere.

Rogers has also taken a stand against the U.S. Highway 101 widening project at Richardson Grove, saying it’s a way to allow big box stores a stronger foothold in Humboldt County.

The differences in the two candidates is stark, perhaps underscored by their disparate campaign financing efforts. By the end of April, Fennell had raised almost $45,000 and already spent almost $25,000 on local advertising and signs. At the same point, Rogers had yet to raise a dime, according to campaign finance disclosure reports filed with the county.

For more on the candidates and the race, including their favorite movies, books and role models, check out past Journal coverage here.