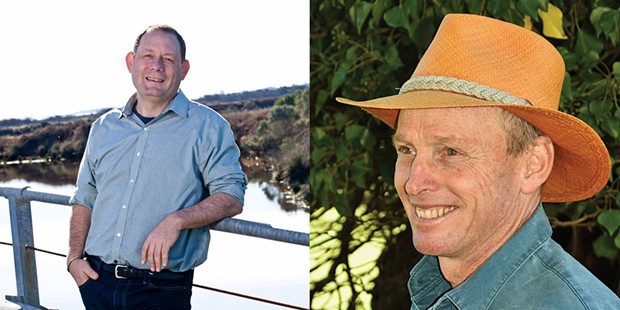 3rd UPDATE:
With 100 percent of Humboldt County precincts reporting, the final election night tally has Harbor Commissioner Mike Wilson finishing with 82 percent of the vote to become the county’s next 3rd District supervisor.

While there are still votes to be counted, Wilson finishes the night with 5,076 of the 6,204 ballots cast in the race.

2nd UPDATE:
Results from 100 out of 121 Humboldt County precincts are in, and Mike Wilson’s lead has grown. With Election Day ballots even higher in Wilson’s favor than mail-ins, the 3rd District candidate now has 80.47 percent of the vote to Uri Driscoll’s 18.78 percent.

Mike Wilson’s lead dropped less than a percentage point with the second report of the night, which counted 52 of 121 Humboldt County precincts reporting.

It appears not many 3rd District precincts were included, though, as the second report only adds 135 total votes to the race. Wilson got 94 of those, with Uri Driscoll pulling 39. The totals are as follows:

Ballots cast at the polls today have yet to be tallied.

This is the first supervisorial campaign for either candidate. Current 3rd District Supervisor Mark Lovelace announced last year he would not seek re-election for a third term.

Wilson has served on the Humboldt Bay Harbor, Recreation and Conservation District board for 10 years, presiding over that board's shift in the politics toward expanded aquaculture, conservation and recreation projects, including the district’s cleanup of the Samoa pulp mill.

He’d won wide support among the 3rd District’s left-leaning politicos, saying that, if elected, he would continue his effort to plan for an economic and environmental future for the county. That requires responses to homelessness, a commitment to economic diversity, an adaptive marijuana industry and the flexibility to address those issues with limited budgets. He’s also been a long-time trails supporter.

Driscoll has never served in public office, but said his experience as a farrier and a variety of other jobs made him the ideal candidate for the 3rd District. He too said the county’s economy was a primary issue and expressed concerns about homelessness, affordable housing and drug use.

A strong local economy would have limited the influence of “outside forces,” he told the Journal, and he called for robust industrial and commercial zones as well as protections for agricultural lands.