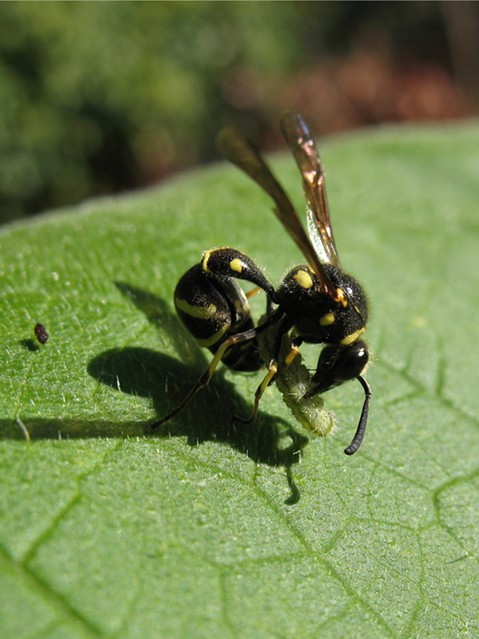 If you like the Alien movies with Sigourney Weaver, you'll love the solitary wasps.


Take one of my favorites, Eumenes, the potter wasp. She flies up and down tiny branches, diligently seeking small caterpillars. When she finds one she darts down, grabs it and paralyzes it with a sting. Once it's immobilized, she takes it to a secondary location and carefully massages the prey, squeezing everything out of its gut. After all, if those contents were to spoil, the rot could spread to the victim and kill it prematurely. Then she stings it carefully injecting tiny measured doses of her paralytic venom at selected nerve clusters to assure the paralysis is permanent and total. Once the prey is cleaned and totally helpless, unable even to squirm, she carries it off to a dried mud cell where she deposits it and a single egg, finally sealing it off with a mud plug. The tiny caterpillar waits in the darkness for the wasp larva to hatch and carefully eat all parts not necessary to sustain the victim's life, once again preserving the food's freshness as long as possible. 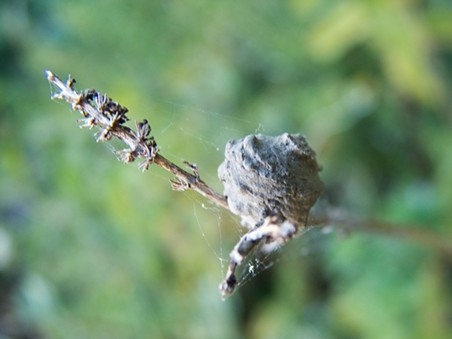 There are obvious variations. The mud dauber wasp, for example, fills its tubular cells with several small paralyzed spiders. The threadwaisted wasp takes prey heavier than herself to a cell she has dug underground. Many tiny species lay several eggs on or in an active healthy caterpillar. The larvae carefully avoid eating anything immediately vital until the very end when they emerge and pupate on the outside of the shriveled husk of their host. They are all called “parasitoids” in contrast to regular parasites, which, like mosquitoes and fleas, leave their hosts alive at the end of the interaction. Once the female has spotted her victim, the end is horrifyingly inevitable. The fact that many of them are extremely specific as to what species they hunt can make them valuable biological control agents. It is good to remember though, that it is not in a picky eater's interest to eliminate all of their food supply so they will seldom completely eradicate a pest but can be relied on to keep populations in check.