Centenarian, Rotarian, One of a Kind: Jim Howard Honored 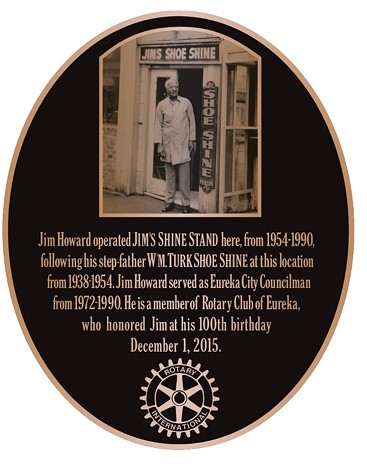 Howard operated Jim’s Shine Stand in Old Town Eureka from 1954 to 1990, having taken it over from his stepfather W.M. Turk, who opened it in 1938. The shoeshine stand, which was once close to the present Eureka Police Department Old Town kiosk at Third and E streets, is the site of a new plaque bearing Howard’s name and photo.

At 100 years old, Howard does not move as fast as he once did. Asked how he was feeling, he told the Journal, “aging slowly.” As Rotarians, city councilmembers, Old Town old timers and associated well-wishers gathered for the ceremony, Howard sat in Rotary member Chuck Ellsworth’s truck, drinking from a carton of milk and eating a cookie.

Ellsworth said that Howard is still faithfully attending Rotary functions, as he has for the past 42 years, although he now needs to be driven from the assisted living facility where he lives. Two weeks ago Ellsworth came to pick him up and Howard “collapsed in [his] arms.” He spent a few days in the hospital. Members of the club visited Howard with the plaque, in case he could not make it to the ceremony. They said he seemed pleased.

Despite the health setback, Howard was well enough today to walk over from the truck and help pull the ribbon that unveiled the plaque. He then used his cane to illustrate where his stand had once been, not where the plaque now sits, but a few feet over toward the edge of the parking lot, he asserted. There were several rounds of applause from the crowd. 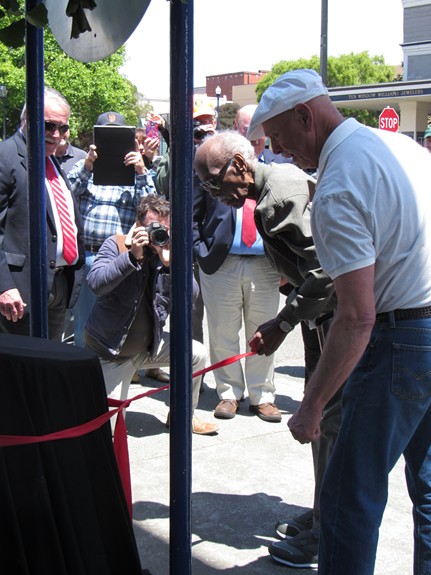 The Eureka Rotary Club made the decision to honor Howard on the occasion of his 100th birthday in December 2015, Ellsworth explained. It took a few months to actually bring the plan to fruition. In addition to his longevity as a council member, Rotarian and Eureka resident, Howard made several important contributions to the community as it is today. Ellsworth said Howard was “instrumental” in the redevelopment of Old Town and the establishment of the Woodley Island Marina.

For most of the previous century, Eureka’s Old Town was a seedy place, teeming with saloons, prostitutes and blue collar workers looking to part with their money. An economic downturn in the 1960s and 1970s turned the area into what Ellsworth called a “skid row.” For a while it looked like the entire area would be razed and developed into a highway. But, thanks to the efforts of Howard and others, in 1973 Old Town was declared a National Historic District and in 1974 the Eureka Redevelopment District was created.

“Howard helped put money and people together to make it happen,” said Ellsworth.

Lane Strope, who was the owner of Times Printing in Old Town during Howard’s tenure, said that although there was some controversy over the gentrification of Old Town, it was ultimately for the best. “My parents lived down the block, between G and F streets. There were seven saloons on one block, with live music every night of the week,” he said.

Howard was also the former president of the Eureka chapter of the National Association for the Advancement of Colored People. In a phone interview, current NAACP President A.V. Powell acknowledged another important accomplishment by his former fellow board member. “He’s the only minority city councilman that we’ve ever had,” said Powell.