One of the most remarkable things about many insects is their ability to completely change their lifestyles through the process of metamorphosis.

Like us, the most primitive insects start out as small copies of their adult parents. Their lifestyle will be the same throughout their entire lives as to where they live, what they eat and how they react to stimuli. The silverfish, and bristletails, are of this group.

Next up the evolutionary tree are creatures that start life as small copies of the adults, but lacking one distinguishing characteristic: wings. There are a great many insect species that fit this profile, the “true bugs” (order hemiptera) are like this. While each stage resembles the adult in general shape, the last molt into the adult “instar” is when they will get wings and can mate.

They are followed by a most remarkable group, everyone's favorites, the Odonata, dragonflies and damselflies. A bit over 300 million years ago, their larvae returned to the water. Looking at one their young, it is difficult to tell what it will eventually become. Their shapes are often remarkably different from their adult forms, they breathe water through gills at their rear ends and can expel it forcefully giving them jet propelled rapid movement. Their jaws snap out on a hinge somewhat similar to the monsters in the Alien movies. Unlike their adult coloration, they are usually well camouflaged; some species going so far as to allow algae to grow on their carapaces. For the most part they crawl around on the bottom of ponds, lakes or streams. 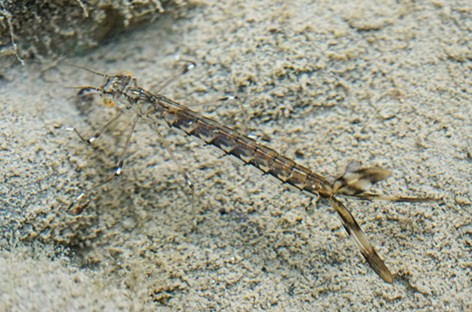 Unlike insects even higher on the evolutionary tree, they have no resting pupal or cocoon stage like flies, butterflies and beetles. One day, the larva just pulls itself out of the water, sheds its old exoskeleton, pumps up its wings, dries them and flies away breathing air and capturing prey on the wing. As adults they can hardly walk at all, and will take wing to move an inch if necessary.

It's like a magic trick in slow motion. I've watched the transformation, which can take place in an hour under ideal conditions. Technically, the newly minted adult is called a teneral and although it can fly, it will be a few days until it takes on its brightest colors and can mate.

The males of some species develop a white chalky prunosity over parts of their wings and bodies throughout their lives but, unlike that dramatic final molt it, is only a matter of a gradual coloration change over the weeks or months it has left to live.