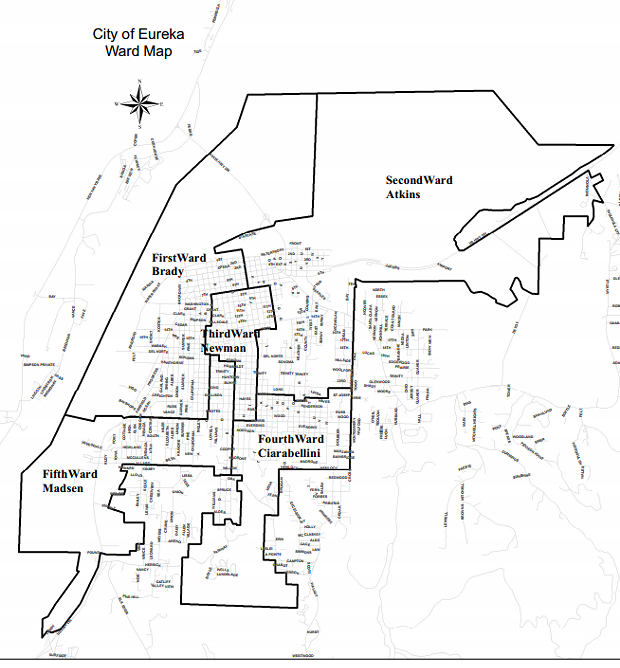 The Eureka City Council will consider Tuesday whether to scrap its long-maligned electoral system.

Currently, Eureka has a kind of hybrid system. Each of the council’s five members represent a ward of the city, within which they were required to reside when they ran for office. This provision has seen a lot of council hopefuls moving into new homes and apartments in the lead up to elections and a host of carpetbagging allegations. But when it comes to Election Day, the contests are decided through a citywide vote, meaning a resident of the 1st Ward has as much say as anyone in the 5th Ward as to who will ultimately represent the 5th.

The system has long been criticized, with people calling for the city to either shift to a true ward system that would limit voting to residents of the ward in question or an at-large system that would allow a citywide vote to elect councilmembers from any part of the city, regardless of ward. (Most recently, a proposed initiative that would have shifted the city to a true ward system failed to qualify for the ballot in 2010 despite an endorsement from the local ACLU chapter.)

Apparently spurred by some liability concerns — the hybrid system has been challenged elsewhere on the grounds that it can be discriminatory against minority voters and the decisions have come back overwhelmingly against cities — city staff is now recommending that the council take a look at shifting to a true ward system.

The issue will have to be ultimately decided by voters, but the council will begin discussion Tuesday on whether to put a measure on the November ballot asking voters whether they would like to see a true ward system in Eureka that would limit residents to voting for the councilmembers that will represent their specific ward.

In other matters, the council will discuss Tuesday whether to again amend it’s shelter crisis declaration, this time to include properties at the foot of T Street near the Samoa Bridge and the city Salvage Yard on Marina Way in the city’s no-camping enforcement zones on a rotating basis. Currently, the council has directed the police department not to enforce the city’s no-camping ordinance from between the hours of 7 p.m. and 7 a.m. at a site that rotates every 30 days between a parking lot on Koster and Washington street and a property at the foot of Del Norte Street. This amendment would include the two new properties into that rotation, to continue “for an indefinite period of time.”

The council is also slated to consider whether to put forward a ballot initiative that would raise the cap on government funded low-income housing units within the city. Pursuant to Article 34 of the California constitution — which apparently followed a controversial housing project in Eureka back in 1950 — cities can limit the number of these units through a popular vote.

Back in 1976, Eureka voters capped the number of low-income units in town at 250, a cap that has now remained in place for 40 years. According to the city staff report, as of December, Eureka had 79 units that qualified as low-income under Article 34 and the city currently has plans to add 98 more — 49 at “The Lodge at Eureka,” formerly the Downtowner, and 49 at the “Eureka Veterans Village.” Those projects would bring the current number up to 177, which staff fears could hamper future projects to provide more affordable housing.

Staff is recommending that the council put forward a ballot measure to voters that would cap Article 34 units at 3 percent of the total number of housing units in the city. For example, in 2012 the city had 11,055 housing units, meaning the cap would have been placed at 331 low-income units.

You can watch the council meeting, which begins at 6 p.m. Tuesday, online here.