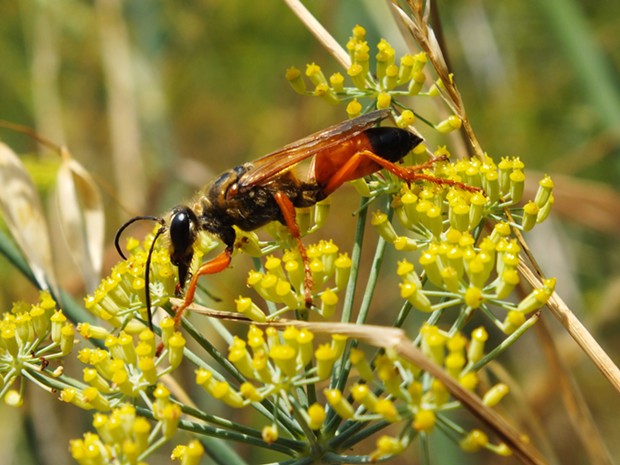 In more than 300, trips I have yet to go on a walk down to the Van Duzen River and not see something interesting. Today was no exception.

Because I got a late start I expected all the dragonflies to be perched high up in trees for the night. The puddle I've been watching had finally dried up as the river level dropped. Several Tiger Swallowtails, some honeybees and bumblebees put in appearances on the patches of wild sweet pea and alfalfa that are blooming, but I had the wrong camera to take full advantage of them.

Near the end of the gravel and sand road that parallels the river, I heard a couple of small engines start up and come in my direction. I stepped aside and allowed two helmeted youngsters on small motorcycles to ride sedately by. Something dark flitted by my feet. For just an instant I thought, “dragonfly,” but it was too small, and didn't move right.

I stood stock still and waited. A hint of motion down there drew my eye to one of the biggest wasps I know. A Great Golden Sand Digger (Sphex ichneumoneus) was searching for something among the dry weeds. I thought she might be hunting a cricket, or grasshopper, the preferred prey for stocking their underground burrows where they deposit their eggs. That could make for some dramatic photography. One thing I did notice was that unlike the times I've observed them nectaring on horsemint and alfalfa, her wingbeats were barely audible. Usually they sound like a World War II bomber and I have often wondered if they make so much noise to warn potential predators. They do sport black and orange, aposematic (warning) coloration and, like most wasps, can deliver a painful sting if molested.

This one was so quiet it seemed to be in stealth mode.

I got down on my haunches and watched. Out of the corner of my eye, I saw another and then another. Although they are not considered as a social species, I think all these ladies happened to find a neighborhood ideal for their purposes.

I watched as they moved tiny pebbles, dug through sand and disappeared into the ground. They were preparing their burrows for night. They would sleep in the ground, protecting their broods and the hoard of food they'd provided for them. No wonder they were flying silently. There are several known “hyper parasitoids” which prey on the provisions and the larvae of solitary wasps which might follow them to their lairs.

At around 5 centimeters long, this widespread and fairly common species is one of, if not the, largest wasp in our area. Fortunately, they are not at all aggressive and work tirelessly storing paralyzed grasshoppers for their next generation, thereby eliminating them from our gardens. 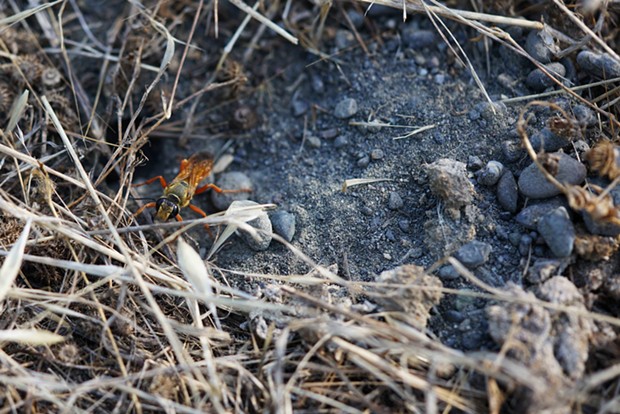