A crowd of about 100 people gathered at the Humboldt County Courthouse last night for a “solidarity vigil,” an event promoted through word-of-mouth and social media. The vigil’s Facebook page asked, “What must change so that these systems meant to protect us, truly protect all of us — especially our loved ones who are Black, Native, brown, LGBT…?”

Tamara McFarland, of Bayside, one of the informal organizers of the “Solidarity Vigil for Our Beloved Community,” arrived early to place 11 framed portraits of recently killed black persons and the five deceased Dallas law enforcement officers on the courthouse steps.

“I got tired of doing nothing,” said McFarland, explaining why she helped with the hastily organized vigil. “I don’t know what the answers are to these problems, but I thought this vigil would be better than sitting at home.”

“I too was feeling lonely these last few days, wondering if anyone else was wondering what one could do,” said Leila Roberts, of Eureka, who also helped organize the vigil.

Eureka Police Chief Andrew Mills and other EPD officers arrived early to meet vigil participants and to be present during the vigil. Mills ended up hearing both compliments and criticism of his recently published front-page opinion piece in the Times-Standard, written in reaction to the Dallas killings.

Roberts facilitated the vigil’s program of music and speakers, including leading a call-and-response reading of each name of the Dallas law enforcement officers who were killed, followed by the crowd responding, “rest in peace.” She next read the names of several black and brown men killed by police and asked the crowd to respond, “rest in power.”

Sarah Torrez, of Eureka, shared her song, “Why,” at the Solidarity Vigil. “EPD ‘s long, bad history inspired me to write this song, and I feel as though it’s just being covered up by the new police chief with a smiling face,” she said.

Roberts then invited the attendees to join hands make personal comments. The vigil ended with Shamara Wyllie Alhassan, of Eureka, reciting a quote from Assata Shakur (written in 1973): “It is our duty to fight for our freedom. It is our duty to win. We must love each other and support each other. We have nothing to lose but our chains.” 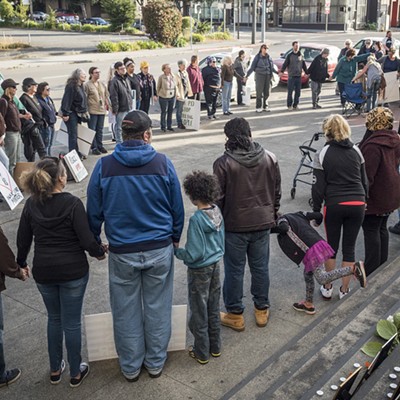 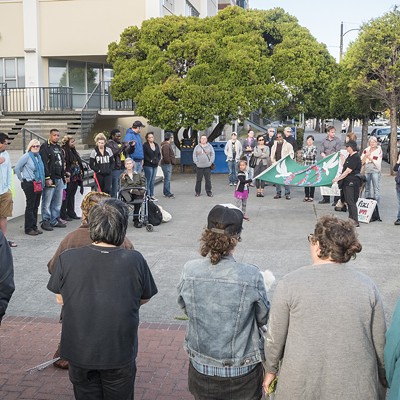