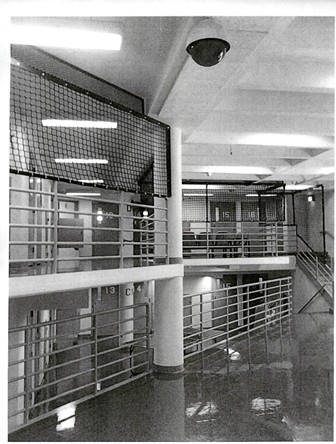 The Humboldt County Board of Supervisors will discuss tomorrow whether to add a provision for suicide netting to the Humboldt County jail's budget. The item comes after a rash of suicide attempts — 12 in 2015 — in the facility, one of which proved fatal. Two of the 12 attempts involved inmates jumping from the top of a stairwell onto the floor two stories below.

In its request for the budget amendment, the sheriff's department states the "purchase of the suicide prevention netting will significantly improve health and safety in the Correctional Facility by eliminating inmates' ability to jump over the existing railings on the second tier." The estimated cost of the netting is $216,731, which will come from a Revenue Community Corrections trust, and not the county general fund. The jail is also requesting an additional $159,988 from the same source for a computerized mail screening system that "will detect both visible and non-visible drugs that may have been folded or soaked onto paper."

Staff confirmed there have been no new suicide attempts since 2015.

The board will also discuss a slew of school bond measures and the renewal of agreements between the county and several regional mental health treatment facilities. Check this link tomorrow after 9 a.m. to watch the meeting live.