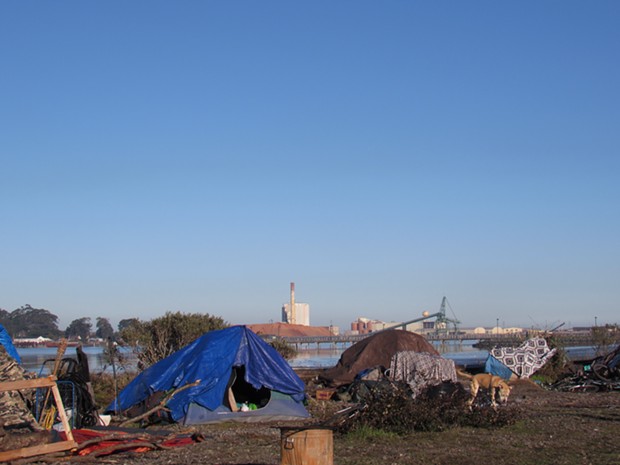 The city of Eureka is asking a federal judge to dismiss the lawsuit brought by 11 people challenging the city’s May 2 eviction of the PalCo Marsh homeless encampments.

Meanwhile, Peter Martin, an attorney representing the plaintiffs, has informed the court he intends to turn the case into a class action suit, which could bring in additional plaintiffs and increase potential liability for the city.

The suit, filed on behalf of 11 homeless former PalCo Marsh campers, alleged the city was violating federal law by enforcing its no camping ordinance and clearing the marsh area, where a cluster of homeless encampments had been located for years. Martin argued in the suit that the city’s action would essentially criminalize the status of homelessness, as there’s inadequate shelter space in the city to accommodate everyone currently homeless within city limits.

The city countered that the there was ample space to take in the people living in the marsh, and that there was a public interest in clearing out the encampments, and the environmental damage and unsafe conditions they caused. Further, the city argued that a failure to clear the marsh of campers could cause the city to lose millions of dollars in grant funding for a trail project and expose it to ongoing liabilities, all of which would not be in the public interest.

On the eve of the evictions, federal judge Jeffrey S. White issued a ruling that allowed the city to proceed with clearing the marsh, but only on the condition that it first secure shelter for the 11 plaintiffs in the case and that it store their personal belongings.

The city has now filed a motion asking the court to dismiss the lawsuit, arguing that because it aimed to halt the May 2 evictions, which have now passed, the suit doesn’t seek an outcome that can be granted by the court. “The law is clear that a case should be dismissed as moot where an act which was sought to be enjoyed (sic) has already occurred,” City Attorney Cyndy Day-Wilson argued in her motion.

Further, Day-Wilson argues that plaintiffs’ allegation that the city’s enforcing its no-camping ordinance constitutes cruel and unusual punishment, violating plaintiffs' Eighth Amendment rights, is hollow given that the “statute has been repeatedly held to be constitutional” by the Humboldt County Superior Court. She goes on to argue that the plaintiffs’ arguments that the evictions violated their protections under the federal Uniform Relocation Assistance Act and the due process clause of the constitution are without merit.

In a reply brief, Martin counters that the suit is really about Eureka’s enforcement of its no-camping ordinance, not the May 2 evictions specifically. Further, Martin argued that some of his plaintiffs were never sheltered by the city and are currently subject to the no-camping ordinance with few options of safe places to go. And, he continued, even some of those who were sheltered by the city at the privately operated converted shipping container community on Third Street will soon be forced to move on, as they will reach the 90-day stay limit.

“The plaintiffs currently housed in the shipping container facility will be forced to leave in just a matter of weeks and at present have no alternative prospects of shelter or housing after that time; once evicted, they will again be subject to potential citation and arrest under the ordinance for camping within the Eureka city limits, and will face summary seizure, impoundment and/or destruction of their personal property,” Martin wrote.

The matter was set for arguments on Aug. 5 but both Martin and Day-Wilson are now asking the court in a joint stipulation to vacate that court date, as Martin has informed Day-Wilson and the court that he intends to file an amended complaint in the coming weeks and move to have the case certified as a class action against the city.