UPDATE:
The Eureka City Council made no report out of closed session Tuesday night, indicating it has not yet made a final decision on whether to petition the California Supreme Court to review an appellate court ruling ordering the release of a police video of officers arresting a juvenile in 2012. The city has until Aug. 28 to challenge the appellate court's ruling.

PREVIOUSLY:
In closed session tonight, the Eureka City Council is slated to discuss a recent appellate court ruling upholding a Humboldt County judge’s order to release a police video of officers arresting a juvenile suspect back in 2012.

Meanwhile, records turned over to the Journal this week in response to a California Public Records Act request indicate the city has already spent at least $7,683 unsuccessfully appealing Humboldt County Superior Court Judge Christopher Wilson’s ruling. On May 20, 2015, Wilson found the public’s interest in seeing footage of the 2012 arrest of a 14-year-old outweighed any privacy concerns, and granted a Journal petition that sought the video’s release.

After initially unsuccessfully petitioning the appellate court for extraordinary relief — essentially an emergency finding that Wilson had abused his discretion in the ruling — the city filed an appeal arguing that the video should be considered a confidential police officer personnel record. Almost a year to the day after the appeal was filed, the appellate court upheld Wilson’s ruling, finding that the video of the 2012 arrest existed independently of any personnel action and thus could not be considered a confidential personnel record under the law.

According to the records released by the city yesterday, it racked up more than $7,500 in outside legal bills and costs during the year-long appeal. The bulk of that appears to have come in the form of consultations with outside attorneys, though it’s not entirely clear because the documents provided to the Journal by the city have been heavily redacted. 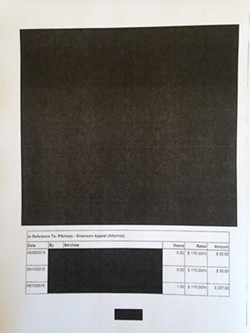 But the forms indicate the city was billed by an outside company for 19 hours of attorney time at a rate of $175 per hour in September of 2015, and another $56 for legal research, for a total of $3,381. The city’s opening brief, penned by City Attorney Cyndy Day-Wilson, in the appeal was initially due in October of 2015, though the court ultimately granted an extension that pushed the deadline into November.

The documents turned over by the city also include receipts for Day-Wilson’s travel down to oral arguments before the appellate court in San Francisco on June 23. According to the receipts, Day-Wilson’s trip cost the city $690, with the bulk of that ($313) going for a one night’s stay at San Francisco’s Phoenix Hotel, which has a website that boasts of the “boutique hotel’s” once being dubbed the nation’s “hippest hotel” by Travel and Leisure Magazine, its past hosting of the Red Hot Chili Peppers and Pearl Jam, and urges would-be guests to “rock out with us.”

It should be noted that the more than $7,500 in costs may not be a complete accounting of what the city has spent on the appeal to date. It only includes documents the city deemed “disclosable,” and it’s unclear if there were documents it chose to withhold. Additionally, it does not account for the fact that the appellate ruling states that the Journal is entitled to recover the cost of defending the appeal from the city.

The Journal’s attorney, Paul Nicholas Boylan, took the case on contingency, meaning he wouldn’t get paid unless the Journal successfully fended off the appeal, at which point he would seek to recover fees and costs from the city.

The Journal also requested from the city any documents which would indicate the amount of staff time spent mounting the appeal but the city responded that it has no “responsive and disclosable” documents and that it isn’t required by law to create a record that doesn’t already exist.

It’s also unclear if the city council has provided direction on Day-Wilson’s handling of the case to this point. There is no record of the city having discussed the appellate case, or the underlying case, in closed session this year or last, according to a Journal review of council agendas.

The Journal emailed Eureka City Manager Greg Sparks this morning asking if the council has discussed the case or provided Day-Wilson with direction on it previously, and if it would be deciding whether to challenge the appellate court’s ruling.

“I don’t believe it is appropriate for me to comment on items to be discussed by the council in closed session,” Sparks replied. “If there is anything to report out of closed session, the city attorney will make a report.”

The council is slated to discuss the case when it goes into closed session at 5 p.m. The city has until Aug. 29 to petition the California Supreme Court to review the appellate ruling.

For more about the case, including a rundown of the underlying facts and links to the court’s opinion and other documents, see past Journal coverage here. The case was also the subject of a recent Journal editorial, which can be found here.

Editor's note: In the interest of full disclosure, it should be noted that this reporter personally filed the petition seeking disclosure of the dash cam video in this case and authored the lower court briefings on behalf of the Journal.