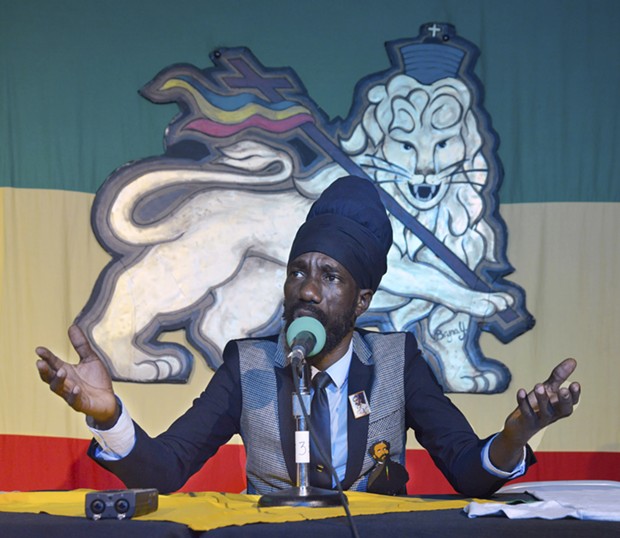 Reggae dancehall artist Sizzla Kalonji has given few interviews in recent years. So it was sort of a big deal when Kalonji’s camp confirmed at the last minute that the artist would be talking to the press at Reggae on the River immediately after his headlining show Saturday night.

The interview appeared to be part of a repositioning effort intended to introduce Sizzla to new listeners and put his work back in the mainstream public eye after a seven-year hiatus from the United States due to work visa issues. In 2008, Kalonji was one of a number of Jamaican dancehall and reggae musicians whose visa applications were declined, reportedly due to their shared propensity for speech acts inciting violence against gay men.

Sizzla lyrics include the lines: “Boom, boom. Queers must be killed” (from “Boom Boom”); “Sodomites and queers, I say death to them,” (from “Get to Da Point”), and “Burn the men who have sex with men from behind” (from “Pump Up”). In 2004 Amnesty International documented Sizzla using the Jamaican slur equivalent to “faggot,” urging crowds to “kill dem battyboys.” In late 2014, he was banned from subsequently performing at a major music festival in Kingston, Jamaica, after including anti-gay and lesbian verses in his set. As Bob Doran reported in the Mad River Union, it would seem we owe his presence in Humboldt this year to the fact that the conflicting appearance originally scheduled for the same weekend at Belgium’s Reggae Geel festival had been cancelled earlier on account of protests, which ratcheted up after a video reportedly surfaced of Kalanji making homophobic statements at a Jamaican nightclub in January of this year.

Last week, the local LGBTQ advocacy group Humboldt Pride called for the Mateel Community Center, which puts on Reggae on the River, to cancel Kalonji's performance but the center declined to do so, issuing a statement that read in part, “… we have an assurance from management that no derogatory speech will occur.” After the show, the festivalgoers I spoke to agreed that that provision had been honored.

“That was one of the best reggae sets I’ve ever seen!” one DJ exclaimed while we waited for the artist to arrive in the press tent, echoing a view I heard expressed more than once.

Starting life as Miguel Orlando Collins in Kingston in 1976, Kalonji became one of the most critically regarded and commercially successful dancehall artists of his generation. He is prolific, having released more than 70 solo albums since 1990. Aficionados revere him as one of a few influential figures who brought dancehall back to its roots in Rastafarian orthodoxy, turning away from the worldly and often X-rated “slackness” of lyrical content that prevailed in the 1980s and early 1990s. He maintains a large fan base in the United States reggae community, despite his long absence from U.S. stages.

Managing a comeback for such an artist might reasonably be construed as high-risk, high-reward, and the star’s people were doing what they could to hedge their bets Saturday. A man who introduced himself as Kalonji’s manager came into the press tent first and imposed a single rule: no questions about homosexuality, which he called “homophobic questions." "This is the condition to which the coordinator agreed,” he snapped. “If I hear one homophobic question, I'm gonna’ pull him out.”

When Kalonji arrived shortly after 1 a.m., he came across as a charismatic and natural pedagogue. He responded courteously and volubly to questions, holding forth on topics ranging from appropriate marijuana use and the title of a recent hit single to the importance of the traditional, procreative nuclear family. He lapsed easily into a preacher’s authoritative cadences. His team’s “don’t ask, don’t tell” approach may have made it possible for him to get his lucrative U.S. visa reinstated but, at times, he appeared to barely conceal his impatience with the circumlocutions this strategy entailed.

One veteran member of the reggae press found a way to take the political conversation to a substantive place, despite the gag order. Sakura Koné, a.k.a. the Roots Master, hosts a late-night reggae show out of WWOZ New Orleans and has been coming to Humboldt to cover Reggae on the River for “about 30 years now.” After an organizer passed him the mic, Koné began by acknowledging Kalonji as “the gentleman who stepped in and returned dancehall to its roots — to Rastafari.” Then then he got down to business.

“My listeners on the air and online love reggae and dancehall music, and they tell me that they love reggae music because of its message of peace and positivity,” he explained, adding that it was difficult for many listeners to reconcile this message of love and peace with lyrical exhortations to violence. He asked the artist directly: “Will you renounce violence?,” politely pressing him to respond. The atmosphere got charged. Kalonji appeared caught slightly off guard, but said, “yes,” after mulling his response. The audience, visibly relieved, exhaled. It was a brilliant bit of conversational judo on the part of the interviewer: a question that respected the letter of game rules while disregarding their limiting intent. But it was also an unsettling demonstration of the fact that, at least here, queer love still quite literally dare not speak its name.

By quarter to 2, it felt late and after being on reggae beat all day the Fourth Estate looked less than fresh. Kalonji, seemingly tireless, cut a strikingly upright figure against the disheveled backdrop of sunburns, wrinkles, dusty feet and bloodshot eyes. He was wearing a neat, dark headwrap and a preternaturally crisp two-tone suit ornamented with a pin depicting Haile Selassie I. He looked like a beacon of rectitude. My head hurt when I tried to wrap it around the fact that this was the man who had played Robert Mugabe’s 86th birthday bash, although that might have just been festival exhaustion. The optics were getting increasingly complicated.

For more on reggae optics and highlight festival performances, see my full-length piece about Reggae on the River in the Journal’s Aug. 18 issue.