Finally! Early this spring, coming back from the mailbox, I noted a brown glob about the size of my fist on one of my fir trees. On closer inspection, I saw several irregular blobs which all turned out to be bunches of brown furry caterpillars, each a little over an inch long. I wondered what they might be when they grew up. 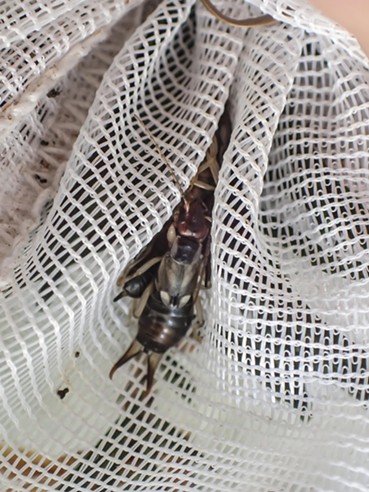 So the next day I selected a branch on which there were only two individuals and covered it with a jelly strainer sack, choked onto the branch with a rubber band. Over the next many weeks, I periodically moved them when they consumed all the needles on the branch tip, each time emptying the sack of shucked off skins and frass (the technical word for bug poop). I really wanted to know what they would turn into. Each time I had to make doubly certain no earwigs got into the covering. Earwigs are omnivorous and I've had problems with them in the past when I tried to do this. Several times half a dozen or so of these European invaders hid in the folds of the bag where the netting bunched up.

Just a week or so ago, I noticed the larvae were gone, replaced by little fuzzy ovals. Yee ha! Since they had pupated, they no longer required any food so I brought them inside and kept them in a jar out of direct sunlight. Last night I noticed one had emerged. It is a silver spotted tiger moth. I turned it loose after a couple of quick photos. Throughout the many weeks of observation I noted the numbers in my trees decreasing in irregular spurts. I suspect many were devoured by birds. In fact, I think my two were the only ones that made it to adulthood out of perhaps hundreds.