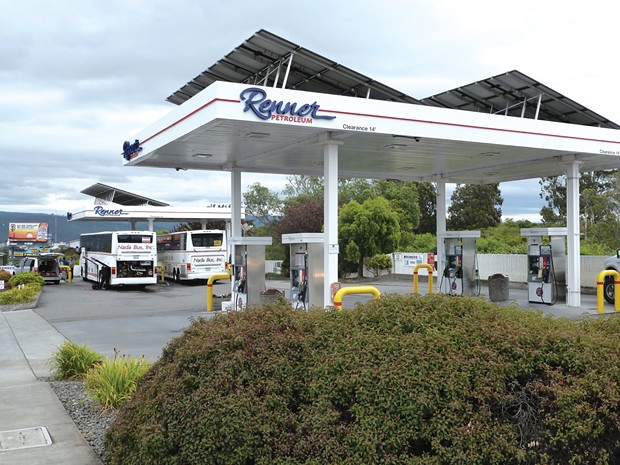 Valley Pacific President and CEO Norman Crum said he doesn’t expect the sale to have much of a local impact. “They’ve got a very nice, clean operation running,” Crum said, noting the company’s solid safety record and high morale among employees. “We don’t really want to change anything at this point. If anything, we may have some of our people from Stockton come up to Eureka to see how they’re doing things up here because Renner Petroleum has a very good way.”

Crum said the acquisition made sense from Valley Pacific’s perspective for three reasons: The two companies have a lot of the same suppliers and a lot of the same “technological backbone” with systems in place that will fit well together, and — most importantly, Crum said — Renner has a “culture and emotional spirit” that fits well with Valley Pacific.

Started in 1961 by Larry Renner as essentially a single fuel delivery truck, Renner Petroleum now employs about 50 people and runs a diversified business. Currently under the control of Larry's son, Mike Renner, the company operates 13 cardlock stations from Klamath to Piercy, and east to Willow Creek, and delivers fuel to about 30 dealers on the North Coast. That accounts for about two-thirds of the company’s business, according to Crum, with the other third coming from private deliveries to businesses and agricultural operations. Calls to Mike Renner were not immediately returned last week.

Renner Petroleum holds a unique place in Humboldt County’s fuel economy. As detailed in the Journal’s July 5, 2012, cover story “Gasoline Kings,” the vast majority of the gas sold in Humboldt County comes from a refinery in Richmond and travels in on barges that unload at the “big, paint-flaking, Chevron-owned terminal that sits behind the Bayshore Mall in Eureka.” From there, it’s hauled by tanker truck to the stations throughout the county and beyond.

Renner’s role in all this is noteworthy, as the company is one of two that takes unbranded gas from the Chevron terminal (companies like Chevron and 76 put additives in their gas making it branded, with Chevron stations in Humboldt adding the company’s patented fuel additive Techron after the fuel arrives on site) and delivers it to independent stations. Additionally, Renner sometimes brings gas into the county on its own, either paying truckers to drive it up from the Bay Area or sending its own employees down and back. But by far the easiest and most cost effective way to bring gas into our rural neck of California is by barge, and for that, Chevron’s the only game in town.

Because of this, the company is often blamed for Humboldt County’s gas prices, which are regularly among the highest in the nation. In reality, however, it’s a lot more complicated than that, as our 2012 story points out.

It’s interesting to note, however, that Valley Pacific boasts on its website of a 60-plus year “association” with Chevron and the petroleum giant’s logo is listed prominently at the top of the page. Asked about this, Crum said Valley Pacific — which he runs along with his two sons — delivers fuel to about 125 Chevron stations in the San Joaquin Valley and along the Central Coast. “I think the ramifications of that are that we have some — I don’t want to say clout with Chevron because they’re a giant international company, but when I pick up the phone and call Chevron, we get their attention,” Crum said. “And people don’t like to hear this, but Chevron has been great to work with. They’re very reliable, very safety conscious and very exacting on regulatory compliance. They, in turn, insist that we are as perfect as humanly possible.”

But Crum stressed that he thinks it will be business as usual for Renner’s operation up here — specifically noting that no workforce reductions are planned — and that customers largely won’t notice the ownership change. Valley Pacific, he said, will continue to run the company and treat employees with the same local touch as the Renner family.

“As big as we like to think we are, these are still small, family-owned businesses,” he said.

See the full press release from Valley Pacific copied below and do check out the 2012 story here for a better understanding of Humboldt County’s petroleum market forces.


Valley Pacific Petroleum Services, Inc. of Stockton, California, a family-owned fuel and lubricant supply company that will celebrate its 70th anniversary next year, today announced the acquisition of L&M Renner, Inc. (also known as “Renner Petroleum”).
The new stockholders have expressed an interest in keeping the Eureka-based petroleum company, a leading distributor in California’s North Coast region, a locally-managed and community-focused operation.
The Renner family and Renner Petroleum have been in the fuel and lubricant distribution business in the Eureka-Fortuna-Garberville area since the late 1940s. Larry Renner owned and operated the business for many years before bringing in his son, Mike, in the late-1970s. Since becoming sole-owners in the 1990s, Mike and Mari Lou Renner have enjoyed playing a key role in the North Coast economic community. In recent years, Renner Petroleum also expanded into the Sonoma County area with an office/warehouse in Cloverdale.
Established in 1947, Valley Pacific is a family-owned company that traces its origins to the end of World War II and the return home of navy veteran Durrel Woolsey. Through the years, the company has grown throughout the San Joaquin Valley and along California’s Central Coast under the guidance and ownership of Norman Crum and his sons Nathan and Grant. They purchased Woolsey Oil in 1994 and later renamed it Valley Pacific Petroleum Services.
Specializing primarily in rural environments, the company supplies fuel and lubricants to agricultural, commercial, governmental, industrial and transportation customers in addition to both branded and unbranded service station dealers. Importantly, Valley Pacific has won numerous state and national safety awards. (See www.vpps.net.)

The newly combined company of around 200 employees will be headquartered in Stockton but will operate the Renner business with local management and community-focus.
“As a family-owned company from a rural area, we realize how important it is to stay engaged with the community,” said Crum, President and CEO of Valley Pacific. “The Renner team has built a strong foundation of clean, safe, dependable, friendly service and we intend to keep that tradition alive. Renner customers should continue to see the same high-quality service they’ve grown accustomed to.”
Mike Renner stated, “In our talks with Valley Pacific, it became apparent that we have much in common. With our community in mind, Renner is now aligning its future with a family-owned company from the agricultural areas of the state. They bring experience, resources and technology to the company that will carry on the vision we have for our customers for years to come. We only want the best for this community to which we owe so much.”
In addition to Renner Petroleum’s facilities in Eureka, Fortuna, Garberville and Cloverdale, Valley Pacific also has 11 offices from Salinas to Santa Maria, and from Lodi to Bakersfield.