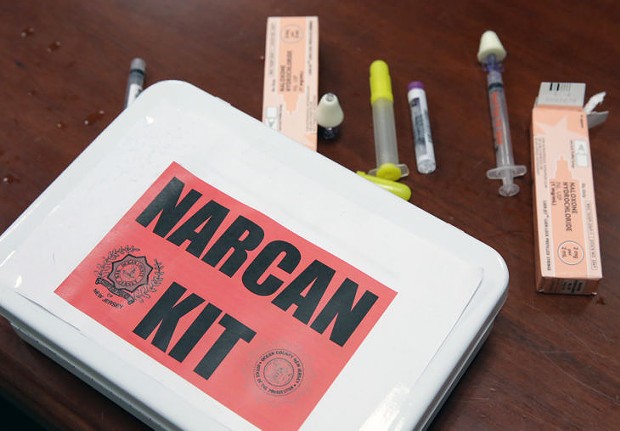 The overdose reversal drug Narcan has saved at least two lives in Humboldt County this month.

Over the weekend, Arcata police officers revived an unconscious 29-year-old man with a nasal spray dose in the department’s first use of Narcan since officers began carrying the medication that counteracts the effects of opioids.

Earlier this month, librarian Kitty Yancheff did the same.

“I never thought I’d have to use it,” said Yancheff, the public service division manager who works at the main library in Eureka. “You never expect it to happen, but you just don’t know.”


The Humboldt County Department of Health and Human Services provided the kits in both cases under its Narcan program, part of a multi-pronged approach recommended by the Centers for Disease Control to combat the nation’s growing opioid addiction epidemic, an approach that also includes changing provider prescription practices and expanding access to medication assisted treatment.

DHHS senior health specialist Alison Newman said individuals who are at risk of overdose, or have family members at risk, can receive the kits after a short training. Health care providers and members of community organizations have also taken the training, she said.

According to the CDC, prescription pain medications and illegal street drugs, like heroin, played a role in more than 28,000 deaths across the nation in 2014 and the number of overdoses have quadrupled since 2000.

Closer to home, Humboldt County saw 60 deaths from opioid overdoses from 2011 through 2013.

In the first five months of 2016 alone, the Humboldt County Coroner’s Office attributed eight accidental deaths specifically to opioids, including morphine, heroin and oxycodone, with another four deaths caused by multiple drug usage.

Narcan works by blocking the uptake of opioids to the brain, immediately putting a person into withdrawal, Newman said. “It’s like an Epipen for an overdose,” she said.

While the concept might conjure up images of a sweaty Vincent Vega (John Travolta) bringing Mia Wallace (Uma Thurman) back from the brink with an adrenaline shot in the famous Pulp Fiction scene, that’s not quite how it works.

“Pulp Fiction is fiction,” she said. “Quentin Tarantino is not a medical provider.”

Narcan is injected in a strong muscle like the thigh — but not the chest — or administered as a nasal spray, Newman said.

While it doesn’t work on drugs like methamphetamines, Narcan also doesn’t have side effects if opioids are not involved. “It’s a very safe medication,” Newman said.

It was a typical busy Tuesday afternoon on Aug. 2 when she noticed a man slumped over in a chair at a computer station by the bayside library’s central desk. Sleeping is not allowed in the library, she explained, so she went over to wake the man up.

Yancheff said he didn’t respond to her repeated attempts to rouse him in an increasingly louder tone, even when she banged on a table and his chair.

Another man, who library staff knew to be a heroin user, came over and called him by name, telling him to get up. Then Yancheff saw the sweat pouring from the back of the man’s head. He was limp and gurgling, his lips beginning to turn blue. Yancheff got her Narcan kit.

“He had all the signs of an opioid overdose and I just knew I had to make a decision. It was truly do or die,” the librarian said. “I could feel the support from the staff, and that was helpful.”

It took two injections — the first to the thigh and the second to his arm — but the man had begun to move by the time the ambulance arrived.

“I’m just happy that we could save a life here at the library that day and I would do exactly the same thing if it happened again,” Yancheff said.