Into and Out of the Theater Business

Looking to manage a marquee? Here's your chance. The Arcata Theatre Lounge is on the market for a cool $1.85 million via Ming Tree Realtors. The revamped Art Deco venue has been listed for a week and includes shops rented by Bluegrass Barber and Smug's pizza.

Over the phone last week, Lara Cox, who owns the theater with her husband Brian, said, "We've done this, we've devoted 11 years of our lives to the theater and it's been awesome … but we're just ready to do something different at this point." That something else may be a project in Humboldt but Cox is tight-lipped about what. There's "nothing we love so much as a project," she said.

And the ATL's renovation has been that. Cox said that, over the course of five years of working with the city, the pipes, electricity, sound, lighting and kitchen, among other things, have all been updated and brought to code and ADA standards. Given the investment, as well as the business, equipment and liquor license, Cox said with a deep breath, "We feel good about the price. The hardest part of this decision is that we have so many loyal customers and the community has been awesome … it's bittersweet."

Don't panic over where to get your B-movie and pizza fix just yet. Until a buyer steps up, Cox said, it's business as usual. 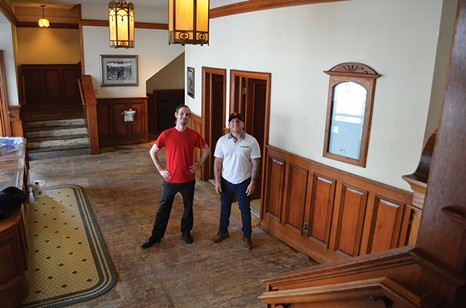 Meanwhile, a crumpled popcorn bag's throw away, the Minor Theater is on the cusp of opening its doors again. Business partners Josh Neff and Merrick McKinlay have set the date for a Sept. 16 red carpet premiere. (See the Journal's cover story on the purchase and renovation here.)

After going back and forth with the city over whether the business should be considered a theater or a lounge, like the ATL, Neff and McKinlay have managed to secure permission for their set-up, including an expanded concessions stand stocked with Slice of Humboldt Pie, Smug's, beer and wine. Add to that an ADA-compliant automatic door and an upgraded fire safety system that includes alarms for each theater.

Neff and McKinlay are finalizing the schedule for opening night and weekend but, so far, it's set to play like a local film fest with short films from the likes of Steven Vander Meer and Violet Crabtree, with locally filmed 1970s schlock homage The Love Witch scheduled later in the fall.