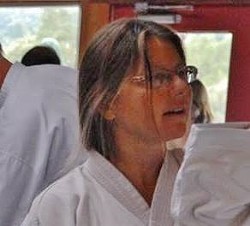 The Humboldt County Sheriff’s Office has confirmed the identity of the victim of last week’s homicide as 52-year old Stephanie Faye Gawboy of Redway. Gawboy’s identity has been public knowledge from almost the date of her death, as an employee of KMUD radio apparently found her body then gave an interview on air about the incident.

The employee, Jordan Jumpshot, described visiting Gawboy’s house in the early morning, as he occasionally stayed and showered there. He said her gate was ajar and her door open, which was unusual. Gawboy, a masseuse, was lying facedown on her massage table in an unusual position. He touched Gawboy’s leg and found it cold to the touch.

“I thought, ‘This is a massage dummy.' I looked over on her side of the room to see if it was a joke. Then I saw there was blood on both sides of her neck, running in a straight line on either side of the table.”

Jumpshot said he left, got a cup of coffee and went to the KMUD studio, where he told his employer and Gawboy’s neighbor, Jeannette Todd, that something bad had happened. Todd said in the interview that she called 911 and, while on hold, drove to Gawboy’s house with Jumpshot. The two were present when a sheriff's deputy and deputy coroner arrived.

Despite rumors of a potential suspect, sheriff's detective Jenn Turner said no suspect has been identified in the case. Turner said she's received dozens of tips in the case but is especially looking to speak with anyone who had contact with Gawboy after Friday, Aug. 12.

An Aug. 22 article in the Redwood Times describes Gawboy as a an outspoken environmentalist, and a leader in the local anti-vaccine and anti-genetically modified food movement.

From the HCSO press release:

Sheriff’s Detectives are investigating this incident as a homicide. Anyone with information in regards to this case is encouraged to call Detective Jenn Turner at (707) 268-3642 or the Sheriff’s Office Crime Tip line at (707) 268-2539.