Live music? Bounce houses? Balloons? Face painting? Emergency management training? Sounds like quite a time at next month's Neighborhood Watch Block Party! But, wait, what's that in the far right corner of this jam-packed flyer? Yes, it's the latest iteration of the "I Like Eureka" campaign, now tinted a badge-proud blue and festooned with a tiny little heart.

Almost exactly a year ago, Eureka's Neighborhood Watch organization began printing its own stickers with the timid motto "I Like Eureka," capitalizing on what had formerly been an underground campaign of anonymous sticker bombing. The black and white bumper stickers began to appear on the backs of squad cars and on t-shirts at public safety rallies, with profits from the sale of said stickers going to benefit Neighborhood Watch. (For a more complete history of the slogan and its original, anonymous promoters, "The Westside Sanguine Society," check out this article.) 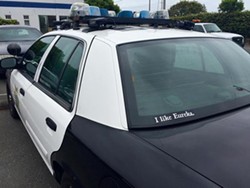 Several months rolled by before the Sanguine Society formally responded with a letter in March to several media outlets decrying Neighborhood Watch's "co-opting and attempted monetizing of the sticker." The slogan belongs to everyone, the society said, but the specific design, the distressed white font against the black background, was popularized by the hard work of the Sanguine Society, which invested time and money distributing the curious symbol of lukewarm boosterism over the course of several years. The letter writer accused Neighborhood Watch of "riding the coattails" of the society's hard work.

the letter went on to suggest that Neighborhood Watch start its own campaign, using one of the "thousands of fonts and colors" that are out there. It appears that the "I Like Eureka Committee," led by the indefatigable Neighborhood Watch participant and city council meeting public commenter Jeannie Breslin, has done just that. Queries to Breslin as to the inspiration behind the new logo went unanswered, met only with a prim email: "The I Like Eureka. (sic) committee and Mayor Frank Jager will share details about our logo at a later time." The flyer's designer, Joel Mielke, was also unable to slake our curiosity.

At any rate, the second annual Neighborhood Watch Block Party, scheduled for Sept. 24, sounds like a good time, with all benefits going to the Eureka Police Department's Shop with a Cop program, which sees local police officers and firefighters take underprivileged children to shop for Christmas presents. And the logo itself is an interesting experiment in rebranding this strangely understated statement of civic pride, which has origins allegedly dating back to the 1970s. The little heart above the "i" in "like" is a fun touch, reminding us of a note from your highschool crush you might spend hours deciphering with a gaggle of giggling friends. We totally not only like you, Eureka, we kind of "like, like" you, which is about as close as your commitment-phobic citizenry can apparently get to expressing unreserved love.