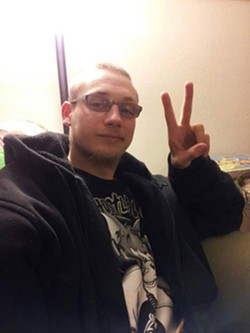 SAN FRANCISCO — Parents who say a Eureka policeman shot their son to death though his hands were in the air can take their case to trial, a federal judge said Wednesday.

Twenty-two-year-old Thomas McClain was shot to death by Eureka police officer Steven Linfoot on Sept. 17, 2014, his parents say in the lawsuit they filed in May of 2015.

The parents, Lance McClain and Jeanne Barragan, say their son was complying with orders and had his hands up when Linfoot fired seven bullets, three of which hit Thomas as he stood in his front yard.

The city claimed in a motion for summary judgment that McClain was reaching for what turned out to be a BB gun in his waistband and that Linfoot acted appropriately to neutralize a potentially deadly threat.

During a Wednesday hearing, U.S. District Judge William Orrick said he would rule for the city on some counts alleging negligent pre-shooting conduct, but not for claims relating to improper use of deadly force.

The city argued that Linfoot is entitled to immunity for claims of excessive force because he acted reasonably while facing an imminent threat of serious physical harm.

But Orrick said that because one witness contradicted the officer's story and testified that McClain had his hands up when he was shot, the material dispute of fact must be hashed out by a jury.

Nancy Delaney, a private attorney representing Eureka, said there was "irrefutable evidence" that McClain's bicep was against his chest when the first shot struck him, proving his arms were at his sides, not in the air, when he was shot.

"We understand the plaintiffs have endeavored to essentially make the decedent a bit of a contortionist," Delaney said, before placing her hands near her waist to show the judge where she believes McClain's hands were when bullets first hit him.

Delaney said that evidence is consistent with Linfoot and another officer's account of the shooting.

The family's attorney, Dale Galipo, countered that it is undisputed that McClain never touched the replica gun in his waistband and that McClain tried to comply with the officers' conflicting orders to put his hands up and "get down."

"Even if the arms lowered hypothetically to the chest or sides, he could not shoot someone," Galipo said. "He would have to actually appear to be grabbing the gun to use it."

Galipo added that no one can say which shot entered McClain's body first, to prove what position his arms were in when the first bullet struck him.

Delaney told the judge that dash cam audio reveals clearly that officers told McClain to keep his hands up, but the judge said he reviewed the footage and found it more opaque than straightforward.

"The commands on the video were confusing to the third person not on the scene," Orrick said. "They may have been clear to a person there, but they certainly weren't clear to me. That's one of the reasons I think there is a dispute."

The dash cam recorded audio, but the shooting was not captured on video.

Orrick said he would absolve Linfoot for his pre-shooting conduct, but that conduct can be used as evidence at trial to argue that the officer used excessive force.

"I'm going to stick with my tentative ruling," Orrick said, citing his plan to grant summary judgment to the city for pre-shooting conduct claims only.

The trial is set to start on Nov. 17 the Federal Courthouse in McKinleyville, in Humboldt County, 13 miles north of Eureka.

Eureka, pop. 27,000, is on the Pacific Coast, 270 miles north of San Francisco and about 100 miles south of the Oregon border. It is the Humboldt County seat.

This story was reprinted with with the permission of Courthouse News Service.