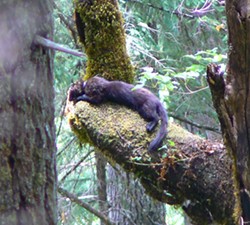 The U.S. Department of Agriculture recently found that Humboldt State University failed to follow laboratory protocols as staff observed the declining health of a dying fisher for nearly a week without calling a veterinarian.

The routine inspection report dated Aug. 3 includes a daily log kept by the animal’s caretakers in the days before the fisher, a rare member of the weasel family, was found dead in its cage:

4/26/16 - "fisher appeared to be heaving/retching after exiting box but observed eating right after that. bald patches increasing in size."

5/1/16 - "fisher ate none of yesterday's food, appears extremely weak and wobbly when walking. FM & KC notified" (Note - not veterinarians, and they did not notify veterinarian)

“The Attending Veterinarian was not notified regarding the condition of the fisher over these dates, until after its death,” the report states. “Daily observation of animals by assigned personnel must include prompt communication with the attending veterinarian, or his or her alternate if not available, in the event that any health problems are noted. Failure to consult with a veterinarian could result in suffering and/or a poor medical outcome for the animals.”

The fisher population has declined dramatically over recent decades with the loss of its forest habitat due to logging and, more recently, the threat of poisons used at illegal marijuana grows.

Richard Boone, dean of HSU’s College of Natural Resources & Sciences, said in a statement that the school is “committed to teaching and research about wildlife so that we can help protect species like the fisher.”

“We were disturbed by this animal’s death, take responsibility for failure to observe proper protocols, and have taken corrective actions to ensure that a mistake like this doesn’t happen again,” Boone said.

According to HSU, where the animal spent most of its nearly 10 years after being dropped off at the campus as a baby, the fisher had health issues.

Jodie Wiederkehr, who runs the Center for Ethical Science out of her home in Chicago, said she is asking the USDA “to launch a full investigation into this incident and levy the largest fine allowable against Humboldt State University of at least $10,000 per non-compliance.”

Wiederkehr said her nonprofit chronicles citations at laboratories across the nation, which she described as a “hidden issue.”

In the case of the fisher, Wiederkehr said she believes the university should be fined and questions how the incident happened in the first place.

“Common sense doesn’t even take over,” she said. “ … No one even thought to contact the veterinarian and say, ‘This animal is suffering.’”