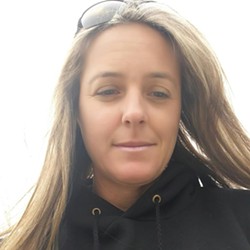 Two months after two 14-year-old girls were killed in a single-car hit and run crash in Fortuna, the California Highway Patrol is finalizing its report for the Humboldt County District Attorney’s Office to weigh filing criminal charges in the case.

Officer Cy May said the preliminary report is finished and currently being reviewed by CHP sergeants and an accident investigation review officer.

“We are in the final phases of the review process and buttoning it up,” May said, adding that the review is designed to find any unanswered questions in the report or holes in the investigation. If something is found, May said further investigation could be warranted but he expects the report to be forwarded to the DA’s office "very soon."

The case has gripped the local community since the two girls were struck while skateboarding on Eel River Drive just after 9 p.m. on July 12. Faith Tsarnas died at the scene and Kiya Kitchen succumbed to her injuries the next day in an Oakland hospital.

While the CHP has only publicly identified Kiya’s mother Marcia “Marci” Kitchen as a person of interest in the case, an affidavit in support of a search warrant in the case indicates CHP investigators believe she was driving the gray Jeep Wrangler that struck and killed the two girls and that she showed signs of intoxication shortly after the collision. Investigators ultimately located Kitchen’s Jeep in her fenced backyard, with damage that matched debris found at the scene of the deadly crash.

The CHP has also identified Joshua Pearlston as a person of interest in the case. A witness who arrived on scene moments after the crash and called 911 told a dispatcher that he’d seen the Jeep idling in the road with a female driver before it drove off.

Ben Okin, a local attorney representing Kitchen, said his client remains in contact with him and is ready to surrender to authorities if or when they secure a warrant for her arrest. “If they let us know that they’re issuing a warrant for her arrest, we will make her as immediately available as possible,” he said. “Nothing has changed in that regard.”

May said this investigation and the current review have taken longer than is typical because CHP is being as methodical and detailed as possible given the high-profile and grave nature of the case. But he indicated some movement is expected soon.