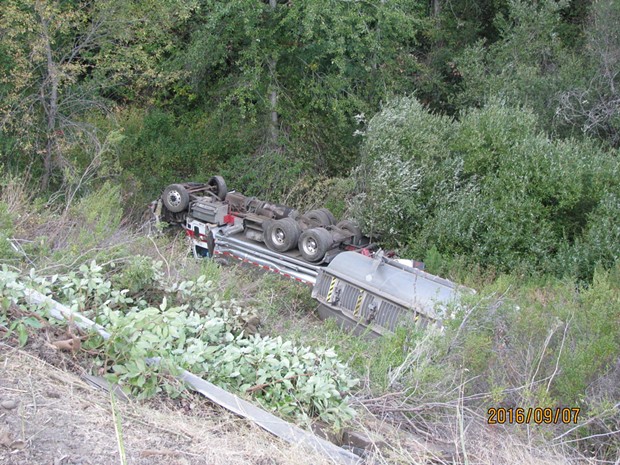 UPDATE:
The Humboldt County Department of Health and Human Services sent out a press release today with a bit more information about the spill, including that the department doesn't believe the spill presents a threat to public health and that there's currently no evidence fuel has entered the nearby South Fork of the Eel River. Find the full release copied below our original post.

PREVIOUSLY:
Approximately 4,000 gallons of fuel spilled into state park soil as crews tried to clear the wreckage of a tanker truck that overturned alongside U.S. Highway 101 near Salmon Creek Bridge.

Information is sparse at this point, but State Parks sent out the below press release last night stating that cleanup efforts are underway and noting that about 4,000 gallons of the tanker's 7,000-gallon load "was released." The crash occurred Wednesday night near Miranda and its cause remains under investigation.

According to Caltrans, the plan had been to transfer the 7,000 gallons of gasoline to another truck before using a hoist to pul the tanker back onto the roadway. The truck's tanks stayed intact in the crash, with minimal observed leakage, according to Caltrans.

We'll update this post with additional information as we get it.

Humboldt County, Calif — Recovery and clean-up efforts of an overturned semi-truck carrying up to 7,000 gallons of fuel continued today near north bound US-101 out hot Salmon Creek Road in Humboldt County. The Peterbilt tank truck and trailer that collided with a guard rail and overturned on state park property on September 7 has been removed. Approximately 4,000 gallons of fuel was released.

Planning efforts to remove contaminated soil are underway and environmental monitoring will be ongoing throughout the entire clean-up process The park is open to the public. Park hours and services have not been impacted.

It is anticipated that traffic will be restored to normal conditions this evening, though traffic may be restricted in the near future to aid in clean-up efforts.


An estimated 4,000 gallons of gasoline from a petroleum tanker that overturned Wednesday in Southern Humboldt has leaked above the South Fork of the Eel River.

There is currently no evidence that fuel has entered the water. Assessment of the area continues today, with cleanup efforts expected to begin Tuesday.

The fuel truck overturned with an estimated 7,000 gallons on board. Some of the fuel was recovered in what’s called a “hot stinger operation,” which involves drilling the top of the overturned tank and inserting a pipe to remove the fuel. Recovery efforts, however, were complicated by the position of the truck and its location on the hill.

The California Department of Parks and Recreation is the lead agency for the spill and the recovery. Staff from the Division of Environmental Health (DEH) remain on site and continue to monitor these efforts.

“We don’t believe at this time that the spill presents a threat to public health,” said Susan Buckley, director of the Public Health Branch of the Department of Health & Human Services. “But in keeping with Proposition 65 notification requirements and out of an abundance of caution, we’re making this announcement over the weekend to make sure area residents are informed.”