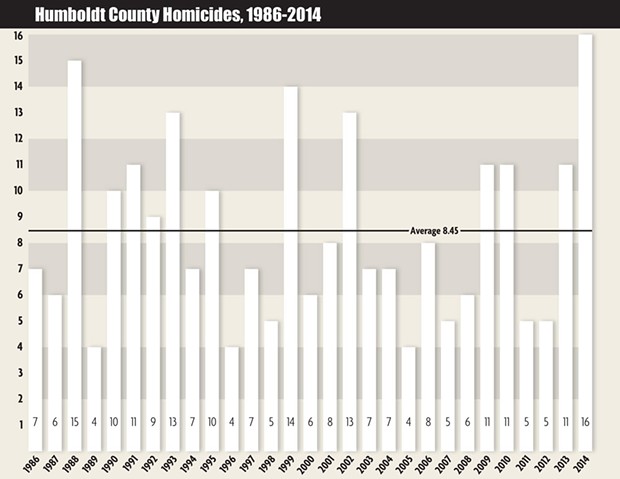 The Humboldt County Sheriff’s Office has launched a homicide investigation after a fight in Hoopa turned deadly Friday night, meaning the county has matched a grisly, 30-year-old record with more than three months remaining in the year.

Deputies were called to a residence on Shoemaker Road at about 9 p.m. Friday to a report of a physical altercation. Medical personnel were first on scene and arrived to find an unresponsive male, later identified as 26-year-old Omar Thunder Dean IV, of Hoopa. He died a short time later and the sheriff’s office is treating his death as a homicide.

Dean’s death marks the county’s 16th homicide of the year, according to data provided by the Humboldt County Coroner’s Office and a Journal review of local media reports. After recording 16 homicides in 2014, the most in the county’s 30-year modern record keeping history, there were 15 homicides in Humboldt last year.

Defined as the killing of one human being by another, it’s important to note that the term homicide does not indicate intent or criminality. As such, fatal car crashes in which someone is at fault — like when an allegedly drunk driver hit and killed a pedestrian in Arcata on Sept. 4 — and officer-involved shootings that may ultimately be deemed justified and acts of self-defense are included in the county’s homicide totals.

With eight homicides since Aug. 1, the county is now on pace to record 23 killings this year.

The full press release from the Humboldt County Sheriff’s Office:


Homicide Investigation - Case 201604554
On Friday, September 9, 2016 at about 9:00 p.m. Humboldt County Deputy Sheriffs responded to a residence on Shoemaker Rd in Hoopa for a report of a physical altercation. Emergency medical personnel were first to arrive on scene and located an unresponsive male. Shortly thereafter, the unresponsive male was pronounced deceased by medical personnel. Deputies, Detectives, and a Coroner arrived on scene to investigate. This case is currently being investigated as a homicide.
The decedent has been identified as 36 year old Hoopa resident Omar Thunder Dean, IV.
An autopsy has been scheduled for Saturday, September 17th.
Anyone with information for the Sheriff’s Office regarding this case is encouraged to call Detective Musson at (707) 268-3643.