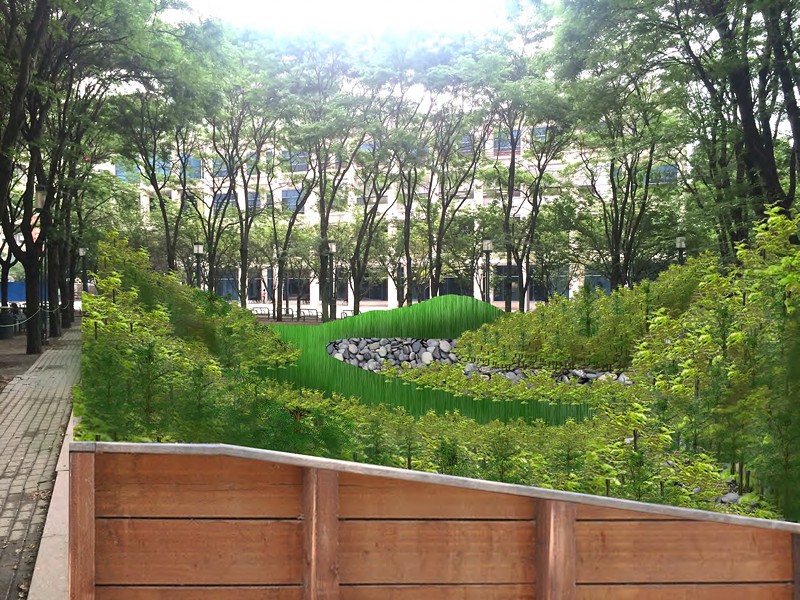 A tiny Humboldt County-inspired redwood forest is taking root in downtown Brooklyn as part of a public art project set to open on Oct. 1.

Spencer Finch’s Lost Man Creek exhibit — which replicates a 790-acre section of the Redwood National Park on a 1:100 scale with some 4,000 dawn redwood seedlings being planted by volunteers.

“Lost Man Creek reflects Finch’s fascination with activating the imagination through observation of natural phenomena,” said Public Art Fund Director and Chief Curator Nicholas Baume. “For many years he has explored the ineffable qualities of our ever-changing natural world through wide-ranging mediums, but this is his first use of living trees.”

The New York-based Public Art Fund reached out to the Humboldt County Visitors’ Bureau in January, which help connect the artist with the Save the Redwood League, which provided detailed topographical information for the living exhibition.

Public Art Fund and Forest City Ratner Companies (FCRC) announce Spencer Finch: Lost Man Creek, an extraordinary new exhibition at MetroTech Commons that recreates, at a 1:100 scale, a 790-acre section of the Redwood National Park in California, one of the United States’ most treasured natural wonders.

In this living artwork, Brooklyn-based artist Spencer Finch scales down the topography and tree canopy of his selected section, with trees that range from 98 to 380 feet becoming 1 to 4 feet in the installation. Finch’s miniature forest for Downtown Brooklyn will live in the eastern triangular lawn of MetroTech Commons, with a footprint measuring 4,500 square feet, and will feature some 4,000 young Dawn Redwoods. Visitors will be able to experience the work from a viewing platform installed on one side of the work, as well as from ground level, offering different perspectives of the work. Spencer Finch: Lost Man Creek is free to the public and on view October 1, 2016 through May 13, 2018 at MetroTech Commons, Downtown Brooklyn.

“Lost Man Creek reflects Finch’s fascination with activating the imagination through observation of natural phenomena,” said Public Art Fund Director and Chief Curator Nicholas Baume. “For many years he has explored the ineffable qualities of our ever-changing natural world through wide-ranging mediums, but this is his first use of living trees.”

To realize Lost Man Creek, Finch collaborated with the Save the Redwoods League, which provided details like topographical and canopy height maps of a select section of the protected, inaccessible forest. Utilizing these resources, Finch created a vision of the site at a 1:100 scale for MetroTech Commons. The miniature forest will flourish with the help of a specific planting and irrigation system, designed to provide the trees with an optimum living environment within this urban context. When the exhibition closes, these trees will be rehoused.

“We are excited to team up with Public Art Fund for our 23rd year to bring beautiful art to
MetroTech Commons,” said Ashley Cotton, Executive Vice President at FCRC. “The work of Brooklyn-based artist Spencer Finch will be on display for a year and a half, longer than any past installation that we have done with Public Art Fund, giving visitors an opportunity to fully engage with one of the world’s most renowned forests through the eyes of one of Brooklyn’s most highly regarded artists”.

At the core of Finch's practice is an ongoing investigation into the nature of light, color, memory, and perception. The artist is known for transforming his own observations of a particular time
or place into various media from painting, drawing, and photography to installation. Lost Man
Creek references the fleeting and the temporal elements inherent in all areas of life, with the
artist mining the observed world to create a poetic installation that speaks to a shared existence.

Among previous projects are A Certain Slant of Light (2014-15), a large-scale installation at The
Morgan Library & Museum inspired by its collection of medieval Books of Hours; Trying To
Remember the Color of the Sky on That September Morning (2014), composed of 2,983
individual watercolors representing the artist’s recollection of the sky on September 11, 2001;
There Is Another Sky (2014), which transformed a formerly dark alley into an urban forest
sanctuary at South Lake Union, Seattle; Painting Air (2012), an installation of more than 100
panels of suspended glass inspired by the colors of Claude Monet's garden at Giverny; and The
River That Flows Both Ways (2009), a permanent installation composed of an existing series of
windows transformed with 700 individual panes of glass representing the water conditions on
the Hudson River over 700 minutes in a single day.

“Through both a scientific approach to gathering data—including precise measurements and
record keeping—and a poetic sensibility, Finch’s works often inhabit the area between objective investigations of science and the subjectivity of lived experience,” said Associate Curator Emma Enderby, who organized the exhibition. “In a world where climate change is at the core of societal debates, Finch’s installation in the heart of one of the most urbanized neighborhoods
of the city presents us with the universal reality of nature’s power to awe and inspire, and the
importance to remember and protect such wonders.”

In conjunction with the exhibition, Spencer Finch will give a Public Art Fund Talk at
The New School on November 16 where he will focus on his various public and large-scale installations.