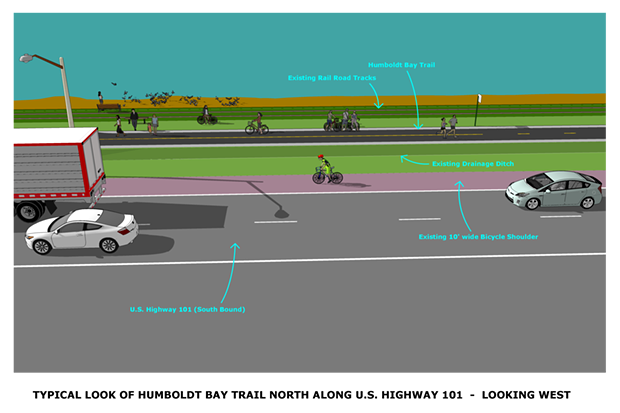 Efforts to link a series of trails to create a 13-mile-long recreational waterfront corridor between Eureka and Arcata took two steps forward this week with nearly $1 million in grants being awarded to the cities.

In the works for years, the $550,000 California State Coastal Conservancy grant awarded to Arcata on Thursday, coupled with the announcement of a $323,000 grant for Eureka from the National Park Service and the Land and Water Conservation Fund earlier this week, moves the long-anticipated trail closer to completion.

While the Humboldt Bay Trail will provide a continuous route between Eureka and Arcata away from cars, the pathway will also serve a larger purpose as a critical connection with the California Coastal Trail.

Press release from the city of Arcata:


The City of Arcata’s Humboldt Bay Trail North (HBTN) project was awarded a $550,000 grant from the California State Coastal Conservancy at a meeting held at the Wharfinger Building in Eureka on Thursday September 29.
This project will construct a multi-use trail from Samoa Boulevard through the Arcata Marsh and Wildlife Sanctuary and then integrate with the railroad and Highway 101 corridors along the shoreline of the bay to an endpoint north of Bracut Industrial Park.
The southern-end point will transition onto the shoulder of Highway 101 south of Bayside Cutoff, as a temporary condition until the remaining segment of the Humboldt Bay Trail is constructed.
The Coastal Conservancy’s grant provides the final funding needed to construct the northern three-mile section of the planned 13-mile long Humboldt Bay Trail which will be the backbone of Humboldt County’s envisioned regional trail system and will provide a safe, Class I, ADA-accessible trail between Humboldt County’s two largest cities.
The Trail is also part of the California Coastal Trail, a network of public trails for walkers, bikers, equestrians, wheelchair riders and others along the 1200-mile California coastline, which is currently more than half complete.
At the same meeting, the Conservancy adopted California Environmental Quality Act findings and a mitigation monitoring and reporting program for the project, important aspects of a construction project located close to Humboldt Bay.
The total construction cost for the HBTN project is $4.6 Million. Other funding for the HBTN comes from the Active Transportation Program and matching local funds.
The trail has long been firmly established by the local community as the region’s highest transportation priority. The County of Humboldt is leading the development of the Humboldt Bay Trail South segment, which will provide the interconnecting link between Arcata’s HBTN project and the City of Eureka’s Waterfront Trail.
Development of the Humboldt Bay Trail South project is still in the initial stages and a target construction date has not been determined.


WASHINGTON­— Congressman Jared Huffman (D-San Rafael) today announced a $323,000 grant from the National Park Service and the Land and Water Conservation Fund to Eureka for ongoing work on a waterfront trail through a once-blighted area.
“This grant means that more Californians will be able to enjoy and appreciate Eureka’s special place on Humboldt Bay,” said Rep. Huffman. “Improving Eureka’s waterfront and creating trails and a clean place for the public to recreate around the Bay demonstrates the value of the Land and Water Conservation Fund in our communities.”
“Through the hard work of city staff and the Land and Water Conservation Fund Local Assistance Office, the former mill buildings can be removed and one of the most picturesque areas of Eureka’s waterfront can be opened up for our community to enjoy a wide variety of nature viewing and recreational opportunities,” said Eureka Mayor Frank Jager.
This grant will go toward the removal of four former mill buildings, which will be replaced by a new park featuring a multi-use trail, nature play area, as well as interpretive viewing platforms and benches adjacent to Humboldt Bay.
For more than 50 years, the National Park Service has provided grants through the LWCF. Its State & Local Assistance Program focuses on helping protect a "seamless system of parks" by providing matching grants for local and state parks outside of National Park boundaries, such as this grant to the City of Eureka.
Phase A of this project is expected to be completed in November.