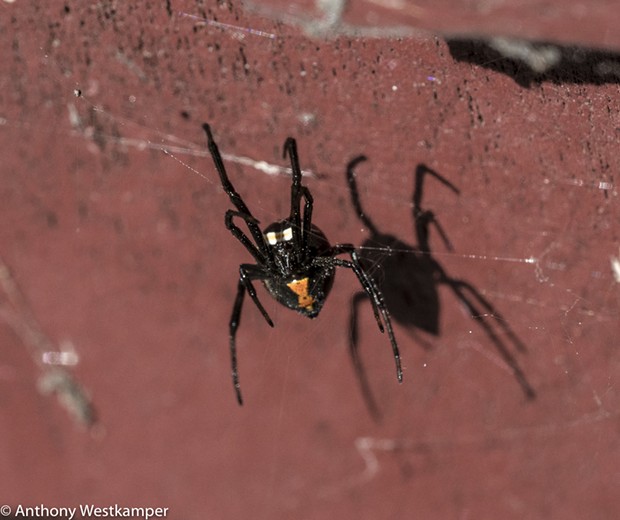 Officials are investigating an apparent infestation of poisonous black widow spiders at the Carlotta Post Office.

Carlotta resident, Journal columnist and bug enthusiast Anthony Westkamper was picking up his mail on Saturday when he noticed a black spider by the post office entrance and, being a bug enthusiast, took a closer look. He spotted the telltale red hourglass at the bottom of the spider’s abdomen and identified it as a black widow. In short order, he spotted seven more on the exterior of the post office building and later notified the U.S. Postal Service.

Fortuna Postmaster John Maloney, who oversees the Carlotta office, said he’s taking Westkamper’s report very seriously and has reached out to the owner of the building that houses the post office and has made plans to bring in an exterminator in the coming days. But Maloney pointed out that the post office makes up just about 400 square feet of the building, which also houses some residences and Café 36.

Maloney said he’s informed the office’s sole Carlotta employee and she’s keeping an eye out inside the building for any spiders, and hasn’t seen any. Westkamper said black widows are not common in the area and guesses they probably hitched a ride with someone hauling firewood or something.

According to WebMD, black widows produce a protein venom that attacks the victim’s nervous system. The venom has a range of effects for humans, ranging from slight to severe. The localized pain from the bite itself can be followed by muscle cramps, abdominal pain and weakness, and in very severe cases, nausea, vomiting, headaches, chest pain and respiratory difficulties.

Children and the elderly are most at risk of having serious reactions, but deaths from black widow bites, even when they are left untreated, are exceedingly rare, with some reports indicating one hasn’t been recorded in the United States in more than a decade. WebMD recommends you seek medical care after a bite if you experience “more than minor pain” or have “whole-body symptoms.”

Humboldt County Agriculture Commissioner Jeff Dolf said black widows aren’t an agricultural pest, so they don’t really fall under the purview of his department and instead are more of a private pest control issue. But Dolf said folks often bring unidentified insects into the Ag Department, and he rarely sees black widows.

“They’re not common around here but it’s not unheard of to have them,” Dolf said. “We do see them from time to time.”

Westkamper said the eight black widows he spotted in Carlotta — which included at least two males — could constitute a breeding population.

To read Westkamper’s first-hand account of finding the spiders, check back here Sunday for his regular HumBug column.