Seasons change, and with them the insects we see. Headed toward winter now, there are fewer dragonflies. It seems the big common green darners are all gone now, migrated elsewhere. But on a recent stroll along the Van Duzen, I saw several others. A solitary dusty, old-looking western river cruiser and a couple too far off to identify. 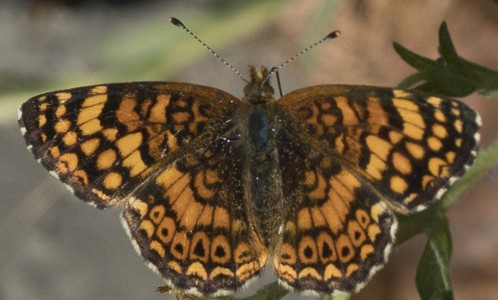 I saw several California sister butterflies. They all looked worn and tired, with faded and shredded wings. There were several small Mylitta crescent butterflies (Phyciodes mylitta), a few tiny gray (with a line of square orange dots) Acomon blues (Plebejus acmon). Interestingly enough this species may have several broods throughout the year and the colors vary from brilliant blue in spring, to dark gray later in the year. Their larvae form symbiotic relations with certain species of ant wherein the ants provide protection and the caterpillar secretes honeydew, which the ants consume.

Finally, near the end of my stroll, I noted one of the mosaic darner family of dragonflies patrolling a tiny sheltered side stream of the river. It never ceased its flight, only occasionally hovering for a few seconds. I don't know how long I spent trying all the tricks I know to get a good shot of it. When I posted it in an entomological site, I got a quick response that it was a shadow darner (Aeshna umbrosa). This large dragonfly is one of the most cold tolerant and is common throughout North America. It can often be seen late in the season patrolling along brushy riverbanks.