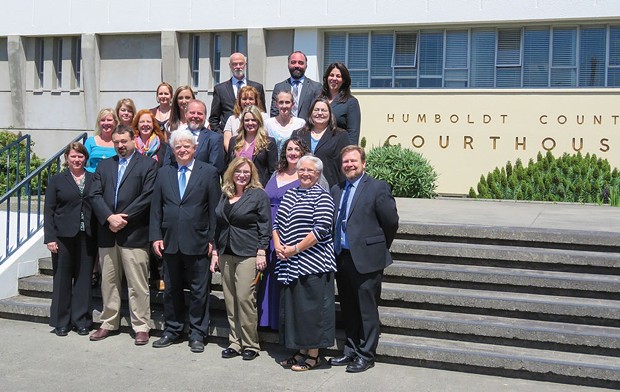 After a decade on the job, Humboldt County Public Defender Kevin Robinson has informed the Board of Supervisors that he will be retiring in January.

In a short letter sent to the board last week, Robinson says his last day heading the Public Defender’s Office will be Jan. 20 and offers to assist with training his yet-to-be-settled-upon replacement. Robinson has been with the office for 22 years, having joined as a deputy public defender in 1994.

In an interview with the Journal last week, Robinson said he’s looking forward to slowing down and spending some time with his 8-month-old granddaughter, who lives in Davis. Other than that, Robinson said he’s not sure what retirement will hold for him. Some time back, he applied to be appointed by the governor for the judgeship that has been vacant in Humboldt since Judge Bruce Watson retired at the beginning of the year.

But Robinson said he’s not optimistic the governor’s office will make an appointment before January, and that due to complications with the California Public Employee Retirement System, he wouldn’t consider accepting the appointment if it comes after his Jan. 20 retirement date.

“They have until 2018 to fill the slot and I didn’t get the sense there was much urgency,” Robinson said.

Looking back on his decade heading Humboldt County’s legal defense office for the indigent, Robinson said he’s proud. First and foremost, he said the office has become someplace where attorneys want to work and tend to stick around. He pointed to a paperless case tracking system that will be implemented next month as a big accomplishment. And he pointed to the office’s movement toward creating a “holistic defense office” — one that helps clients connect with other social services — and taking a lead in crisis intervention training for the police as things he hopes to see continue after his departure. (Read more here.)

As far as who will replace him, Robinson said it’s up to the Board of Supervisors. But, if asked, Robinson said he will recommend that the board appoint Greg Elvine Kreiss, currently the office’s supervising attorney.

And Robinson said he’ll probably look to stay active in some way after calling it quits, but he’s not sure if he’ll have a role in the Public Defenders Office. “I don’t think the public defender would find my looking over his or her shoulder particularly welcome,” he said.