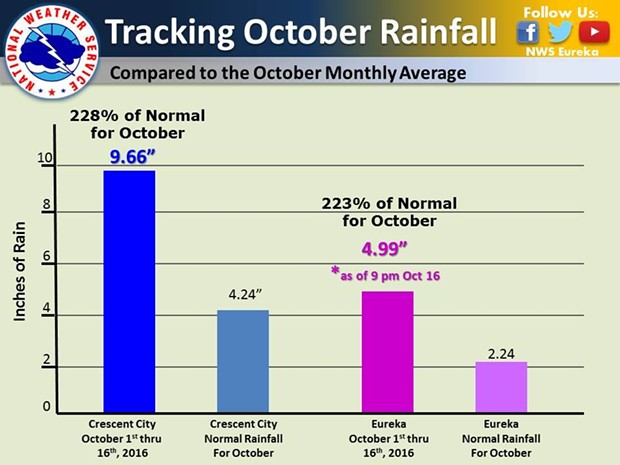 The worst of the storm that hit Humboldt County with a one-two punch is over but there is a chance of coastal flooding in low-lying areas of King Salmon and Arcata this afternoon when the storm surge and high tides meet up.

According to the National Weather Service, tides are expected to peak between 8.5 and 8.9 feet at the North Spit gauge between noon and 2 p.m. The evening could see another one-tenth to one-quarter of an inch of rain along the coast.

Troy Nicolini, meteorologist in charge of the National Weather Service’s Eureka office, said the storm brought local rain totals to more than 700 percent of normal for this time of year — with 6.29 inches since July compared to a normal total of .85 inches.

The system unloaded 3.94 inches of rain on Eureka over the last three days — while portions of Del Norte County saw 10 inches — along with some thunder and lightning that was unusual this early in the season, Nicolini said.

"It was a pretty darn wet storm," he said.

Sunny skies are forecast to return by Wednesday with temperatures hitting a high of 66 along the coast and inland areas seeing top numbers on Thursday, with Willow Creek slated to reach 78 and Garberville topping out at 80. The warmer weather is expected to continue through the weekend.


COASTAL FLOOD ADVISORY REMAINS IN EFFECT UNTIL 3 PM THIS
AFTERNOON.

* COASTAL FLOODING...HIGH ASTRONOMICAL TIDES WILL CAUSE MINOR
FLOODING IN LOW LYING AREAS ALONG THE REDWOOD COAST. THE WATER
LEVEL IS EXPECTED TO PEAK BETWEEN 8.5 AND 8.9 FEET MLLW AT THE
NORTH SPIT TIDE GAUGE.

* TIMING...HIGH TIDE IS AT 1:00 PM AT THE HUMBOLDT BAY NORTH
SPIT TIDE GAUGE. FLOODING MAY BEGIN AN HOUR BEFORE OR CONTINUE
FOR AN HOUR OR TWO AFTER HIGH TIDE.