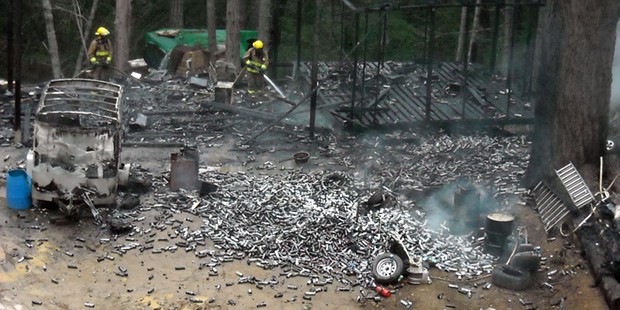 Two explosive topics are slated to come before the Eureka City Council this evening. City staff has recommended the council adopt an ordinance restricting butane sales within city limits. Butane is often used to make hash or honey oil with sometimes dangerous results, as makeshift laboratories in residential homes have been known to explode.

Also on the agenda is the option to amend the existing Shelter Crisis Declaration to include a site at the foot of T Street in Eureka, adjacent to the Samoa Bridge. This amendment would allow city staff to prepare the site as a temporary overnight sleeping area for homeless people in the city of Eureka beginning on Nov. 1. As with previous sites, such as the city parking lot at Washington and Koster streets, at the foot of Del Norte and the Wharfinger building, the site would rotate every few weeks. According to the language of the agenda item, business owners in southwest portion of Eureka are concerned about the concentration of homeless people in that district, as the Blue Angel Village shipping container project will soon move to the Washington and Koster district.

The sleeping area, where individuals are allowed to erect tents and stay between 7 p.m. and 7 a.m., was one of the stop-gap solutions that arose after the dissolution of the Palco Marsh encampment in May. But EPD Capt. Steve Watson said very few of those currently using the sleeping area seem to be from the original Palco Marsh campers.

"Last Wednesday we contacted 23 people," he said. "Only about seven were Palco Marsh people. This number is constantly in flux."

Watson added that the responsibility of his officers to visit the area and ask people to break down their tents in the morning, and to make sure that rules were being followed, has been "resource intensive."

"People are loitering, there is litter, there tends to be an increase in crime, particularly theft and break-ins, that seems to be related," he said, adding that six individuals identified in thefts had been arrested and banned from using the area.

Due to the recent storms, Watson said the strictures on disassembling tents in the morning had temporarily been relaxed. When the Journal drove past the area, currently at the foot of Del Norte, at 7:30 and again at 8:30 this morning, the tents were still up and people were still present in the parking lot. Councilmember Marian Brady referred to the Del Norte site as a "disaster" in a July council meeting, chiefly because it is public property and there is no mechanism to require people to disburse during daylight hours.

Neighboring business owners seem to agree with this assessment — complaining of break-ins, litter and scared customers.

Dolores Blanc, owner of Bedliners Plus, on Koster Street, said she and her daughter now arrive early on Monday morning to pick up trash from their parking lot, a phenomenon she says is directly related to the sleeping area. There have also been issues with verbally abusive behavior and theft.

"One lady defecated right in front of a customer because I wouldn’t let her use the bathroom," Blanc said. "Our concern is people are going to turn more to the internet. I would rather turn to the internet than come and watch someone take a dump on the parking lot."

Blanc's company recently invested in a security system, as did their neighbors at Don's Rent All.

"We put up surveillance cameras, put razor wire because they've been jumping in," said Meredith Biasca, manager of Don's Rent All, which recently spent $10,000 on security cameras and a new fence. "My feelings on having the homeless down there are mixed. I understand that they need to go somewhere. I don’t know why it’s the county or the city’s job to do that. I don’t know that it’s the city or the county’s responsibility to take care them."

But business owners on the other side of town are anxious about the hot potato being tossed in their direction as well. The idea of having a sleeping area at T street was raised earlier in the year, and voted down after many complaints.

Cari Sharer, general manager of the Red Lion Hotel, attended the July 5 meeting to protest the idea, and said she plans to return to the chambers tonight to voice her concerns. The presence of homeless people, she said, has already cost her business. It is the "number one concern" for guests, she said, because it makes them feel unsafe, and the problem has escalated since the Palco Marsh eviction.

"It does seem that they’re everywhere now," she said. "And our heart goes out. We’re very sympathetic to the issues. You don’t want to see anybody in that position, but I also have a business to run. It’s hard to see them doing this because this is more than a once in a while thing our guests are seeing and it does leave a negative tone to the area, which is a shame."

Sharer said that she often encourages her guests to walk down T street with their dogs, a practice that will end if the camp goes in there.

"I have over 80 employees," she said. "I want to make sure my employees have a job. We want to keep people who live in Eureka employed."

Since May 2, the city has spent $60,000 on the temporary sleeping areas, including improvements to the sites and on-going costs for the portable toilets and dumpster. This figure does not include staffing costs from the Eureka Police Department or Parks and Recreation (roughly $2,000 a month). According to Capt. Watson, since May 1st to date, EPD officers have conducted 1,533 patrol checks at the city lots averaging around 9 minutes on scene.

Edie Jessup, with Affordable Homeless Housing Alternatives, said that AHHA will continue to ask the city for a more permanent solution, specifically a tiny house village.

"Moving people weekly from one site to another for 'sleeping' is not a solution for either the homeless or the community. It is inhumane and an attempt to wear the social fabric of the houseless community," she said.  "The investments applied to city ordinances, projects, and law enforcement to move people daily is not cost effective nor does it meet people's needs. Instead of only legal night sleeping in a parking lot, the city should address a clear pathway to stabilizing homeless in a legal 24/7 organized camp to Tiny House Village as Housing First. Until such time as there is adequate affordable permanent housing for all."