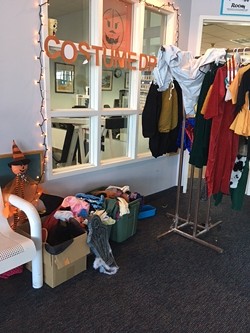 The city of Eureka is collecting costumes and accessories ranging from kooky to spooky to help ensure local children have a happy Halloween.

The drive was started last year for children living at the Serenity Inn but when other parents who heard about the giveaway showed up, Parks and Recreation staff saw the larger community need and expand the effort.

Recreation Activities Coordinator Brian Millett said the city sent out costume vouchers for distribution to a number of agencies and organizations that work with foster children and families in need, including homeless liaisons in schools and social services caseworkers.

So far, nearly 200 children have received costumes that their families might not otherwise have been able to afford, he said.

“Anything helps. These are families that are very appreciative,” Millett said, adding that it's "heartwarming" to watch the excited children pick out their Halloween attire.

The drive is collecting new or lightly used costumes for children and teenagers, with a special need for outfits to fit boys and girls between 8 and 12 years old. Millett said hats, crowns, gloves or other accessories are also welcome.

The city asks that nothing sexual or violent in nature be included in drop offs.

Costumes can be brought to the Adorni Community and Recreation Center at 1011 Waterfront Drive through the first week in November.

“What we're trying to do is get ahead of it for next year,” Millett said, adding there was a high need this year. “We’ll still be collecting costumes up to Nov. 7."

For questions or more information on how to donate, contact Ashley Taylor at 441-4374.