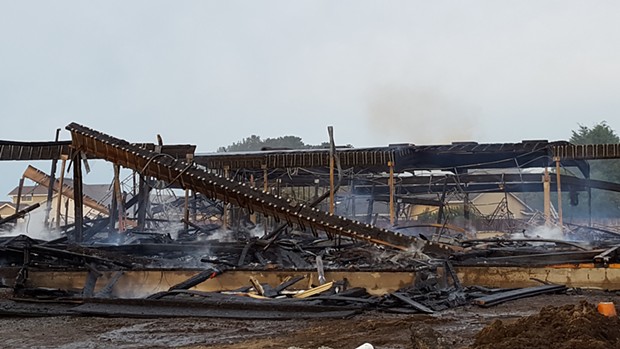 UPDATE: An arson investigation is underway after investigators determined the fire that destroyed a McKinleyville fitness center being built by the Big Lagoon Rancheria was human caused, resulting in $3.3 million in damage.

The building under construction on Betty Court was burned to the ground in the early morning blaze on Oct. 23. Surrounding structures were also damaged. Tribal Chair Vigil Moorehead vowed that the Rancheria would rebuild the center in a statement sent out earlier this week.

Humboldt County Sheriff’s Office spokesperson Selena Zorrilla-Mendoza said deputies were called to the scene on Tuesday at the request of the Arcata Fire District once investigators established the fire was a possible act of arson.


On Tuesday, October 25, 2016, Humboldt County Deputies were dispatched to the 1500 block of Betty Ct, where the Big Lagoon Rancheria’s Gym had once stood. Deputies met with Arcata Fire District Investigators determined the cause of the fire to be “human involved.”

The Sheriff’s Office is requesting assistance from the public in identifying the person(s) responsible for the fire.

The estimated damage to the gym and surrounding buildings is over $3,300,000.


PREVIOUSLY:
The Big Lagoon Rancheria is intent on seeing its $5.9 million fitness center — which is being built on Betty Court in McKinleyville and was leveled by a pre-dawn fire yesterday — rise "back from the ashes," Tribal Chair Virgil Moorehead said in a statement this morning.

"We've been planning this facility to serve the greater McKinleyville community for almost 13 years," Moorehead said. "We have had a vision for this project for a long time, and while we are saddened by the setback of this fire, we absolutely intend to rebuild. We thank all of the people and organizations who have sent us their support over the course of the past day. WE feel grateful to be part of this community and we look forward to bringing our state of the art health club and fitness center back from the ashes."

Arcata Fire was called to the scene at about 5:45 a.m. Sunday, and arrived to see the large fitness complex fully engulfed in flames. The department believes the fire was active for a while before firefighters were summoned to the scene and said what caused the building, which was still under construction, to catch fire remains under investigation.